Resident concerns about the modest size of the outdoor pool facilities included in initial designs for the new Merriam community and aquatic center led the city council last week to approved a $1.6 million budget increase to pay for additional amenities.

The initial budget for the project was approximately $30 million, and will be funded primarily by a 1/4 percent sales tax approved by Merriam voters last year.

Ten people signed up to address the council about the pool designs at its meeting last week, with many lamenting the reduction in size of the competition pool from the current center. The council considered three possible alternatives to the recommended plan, and ended up compromising on a design that expands the competition pool to eight lanes — though it remains 25 yards in length — and expands the zero-depth entry leisure pool area. The pool will have two diving board, but no high dive.

Councilman David Neal, who was an outspoken critic of the process that led to the initial recommendation, and Councilman Al Frisby voted against the plan that ended up passing, saying they preferred an option that would have added even more amenities to the outdoor area. But the majority of the council appeared to think that they plan they favored, which would have added more than $2 million to the budget, was too expensive.

City staff told the council they would be able to direct $1 million in proceeds from a tax increment financing district that encompasses the site to the increased costs. They will be searching for other sources in the city budget to fund the remaining $600,000 in increased costs.

Here’s the plan that had initially been recommended: 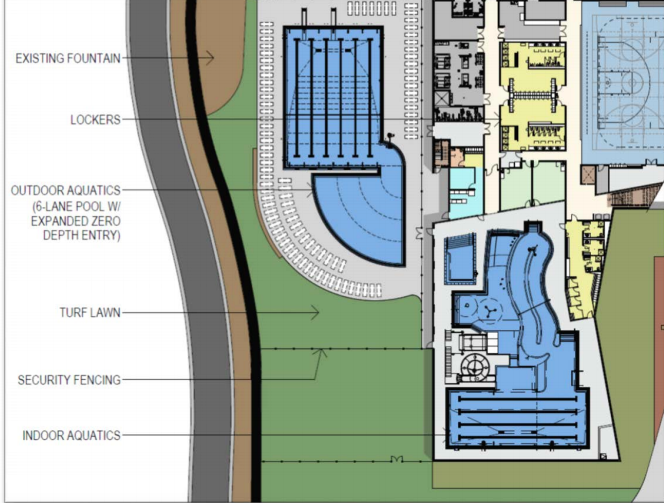 And here’s the updated plan approved to advance by the council last week: 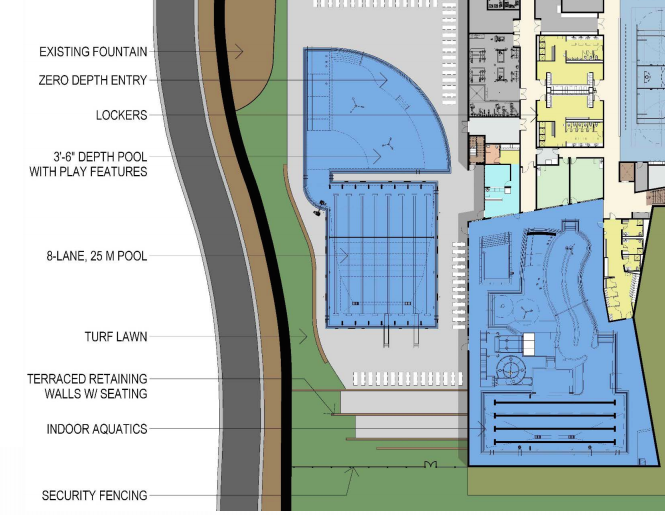 The city will unveil initial concepts for the interior of the community center at an open house meeting from 6:30 to 8 p.m. tonight at Merriam City Hall.