The council also approved a TIF district development plan for construction of a two-story office building, surface parking and related infrastructure on roughly 2.6 acres west of Renner and north of 89th Street. A required public hearing on the proposed TIF district was held; no one from the public spoke.

The developer will be reimbursed for TIF-eligible costs from the increment of increased tax revenue generated by the development for the 20-year TIF term. Reimbursable TIF expenses are estimated at nearly $3.4 million, and a feasibility study by Lenexa Chief Financial Officer Doug Robinson estimates a 20-year TIF increment of $2.2 million. City Administrator Eric Wade said at the meeting that most of the increment will be used to reimburse the developer for public street improvements.

Keith Copaken with Copaken Brooks said during the meeting, regarding TIF developments in City Center, that “the momentum that we’ve been able to build over the last couple of years, and certainly in the last year, is really outstanding.”

One of the project’s three buildings will contain 20,000 square feet and house a restaurant and bank on the first floor and offices on the second floor, with each floor containing 10,000 square feet, Copaken said at the council’s March 6 meeting. Construction of that building is planned to start in August and be completed in May 2019.

A three-story signature office building, two additional restaurant and retail buildings, and covered parking are planned for 87th and Renner in a later phase. 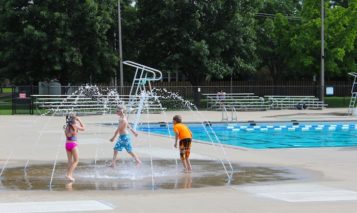