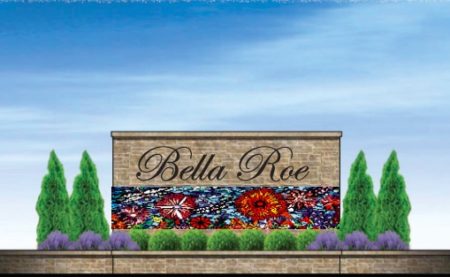 Roeland Park councilmembers heard plans this week to covert fountains at two of the three entrances to the Bella Roe Shopping Center to mosaic signage and landscaping. The shopping center is located at 50th and Roe Blvd and houses several businesses including Price Chopper and Lowe’s. The upgraded entrances would be located between Cricket Wireless and U.S. Bank.

Preliminary design concepts have already been reviewed and approved by the Arts Advisory Committee.

The request to convert the fountains was made by the shopping center’s property manager Joshua Gatewood. Gatewood also has tentative plans to update the column fountains located on the north side of U.S. Bank and those details will come at a later date.

Councilmember Jen Hill said she was in favor of upgrading the entrances but said she wanted to make sure the concept fit with Roe 2020 design planning.

“I just want to make sure it compliments with what we are doing with the rest of the project,” she said.

Gatewood agreed with Hill and said the 2020 project motivated the planning for updated entrances.

Councilmember Tom Madigan said he was all for beautifying the entrances but said additional improvements to the shopping center were needed. Madigan said he would like to see a defined crosswalk between the parking lot and Price Chopper.

Gatewood said Bella Roe would undergo additional improvements in the near future, including upgrading the pedestrian walkway between the parking lot and Price Chopper.

Councilmember Erin Thompson said she would be more comfortable seeing final plans before signing off on the upgrade.

City staff said councilmembers could review a final design concept during an upcoming August council meeting before their vote.