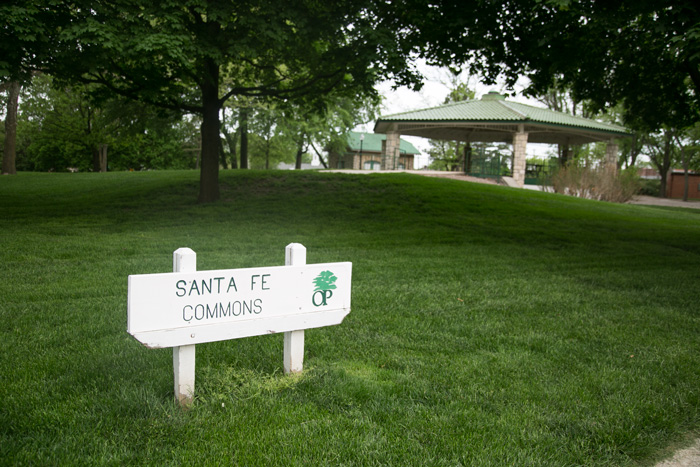 An “iconic” performance space in the shape of a paper airplane was among the suggestions put forward by consultants for Santa Fe Commons Park in downtown Overland Park – a reference to the Strang Airfield of years gone by.

But whether any proposed changes to the park will fly with nearby residents was an open question Thursday night after a spirited meeting with the consultants and around 90 at Matt Ross Community Center. As the meeting opened, some in the crowd scoffed at the proposals, particularly the ones that put the Farmers Market into the park.

By the end of the consultant presentation, Jen Cross of RDG Planning and Design jokingly suggested participants could fold their comment sheets into paper airplane projectiles and sail them toward the dais, an idea that was met with good-natured laughter.

The consulting firm, hired by the city to plan a facelift for the 3.8-acre park, presented its first concepts after collecting ideas at a previous meeting. Four park layouts were put forward, two with a farmers market and two without.

With or without the market, some similar ideas carried through. The park could have a performance stage, areas for outdoor lunches or informal meetings, areas where electronic devices could be plugged in, and outdoor play equipment. The play equipment might also include more adult-oriented things like table tennis or corn hole. A splash play area was included in some of the concepts. New bathrooms and shelters would also be built.

The plans divided the park into three zones, with an activity core in the middle and green space to the north and south. The existing park bandstand and gazebo would be torn down, but the carriage house would remain. All plans included a loop for walking the park.

Here’s a breakdown of the plans: 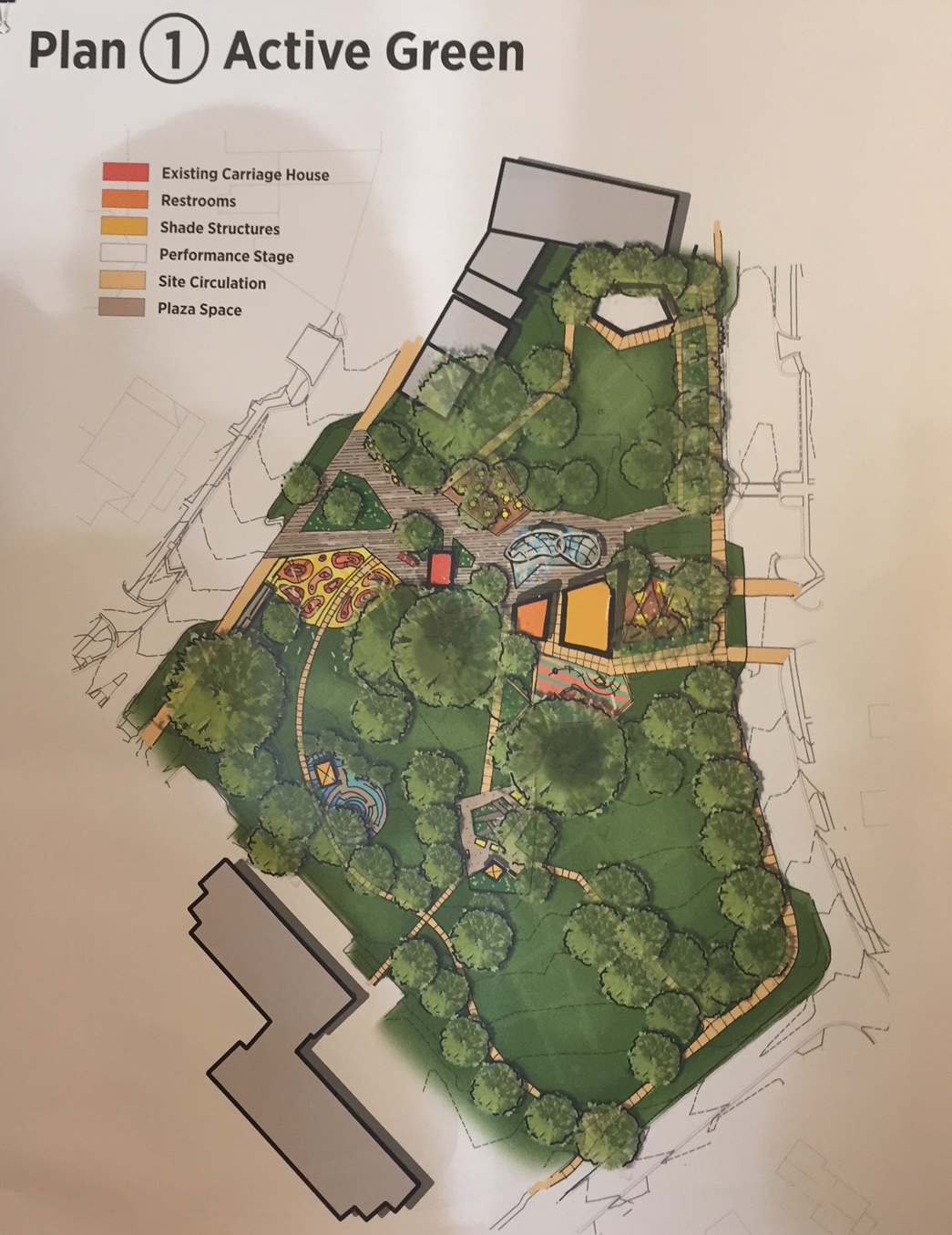 The performance stage is at the north end of the park near existing businesses, with an open lawn and spaces alongside with plug-ins. The central area has dining tables with some type of deck or pavers. The south end could have green space, an inter-generational play area, small shelters and perhaps a garden space. 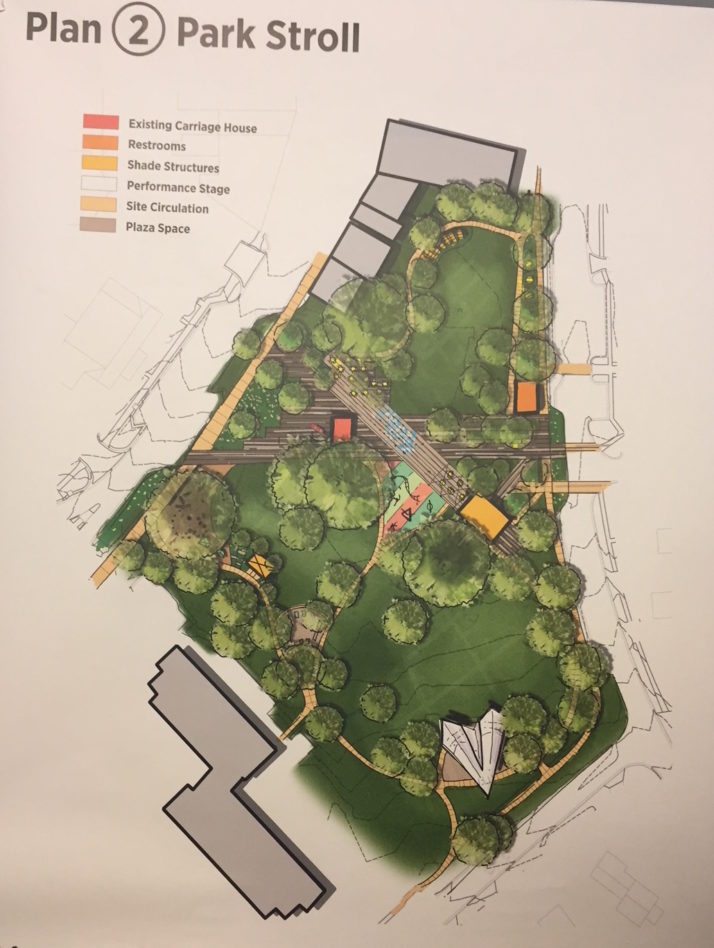 The performance stage is at the southern tip of the park, represented in the shape of a paper airplane. That part of the park would also have shelters and spaces for outdoor games. The park’s middle includes a diagonal walkway and outdoor dining area to connect the park to the businesses nearby. A spray jet water feature also is in the middle area. The north would have green space, small shelters and perhaps adult play equipment as well as a wifi area. 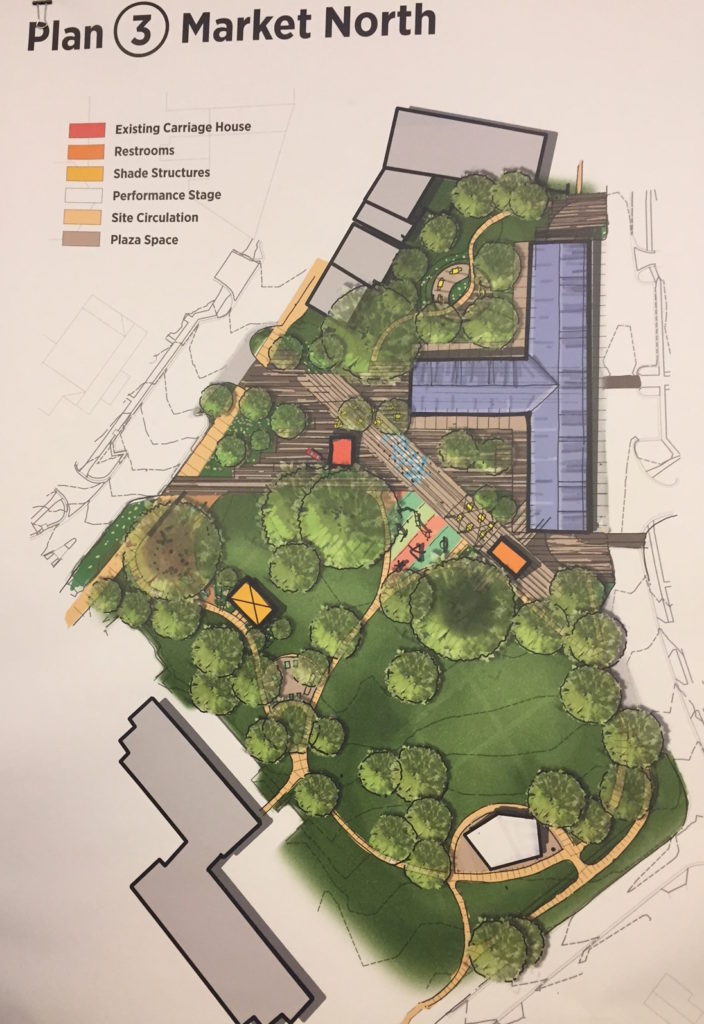 The Farmers’ Market is a T-shaped structure on the northeast edge of the park in this plan, configured with a central aisle for shoppers and vendors on either side. The north end also includes space for outdoor meetings or lounging. The middle would have a water feature and outdoor dining and the south would have the performance stage and play structures. 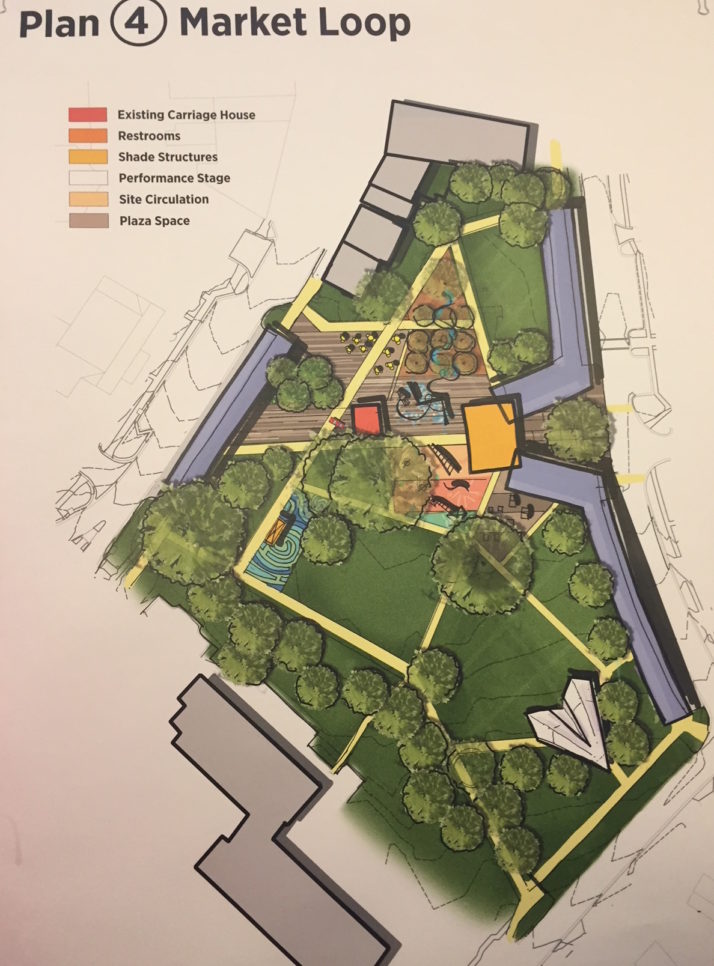 The market is split into three segments in this plan because it is laid out as a single row of stalls and shoppers. Two of the segments are on the northeast edge and the third is on the western edge, with a connecting area through the middle of the park. The performance stage is positioned at the southeast edge.

Some of the proposed amenities such as adult play equipment and outdoor tables and wifi have a decidedly contemporary, urban vibe. Bruce Niedermyer, of RDG, said one of the goals was to bring more people to a little-noticed park and to make it more welcoming to all ages. City officials have previously said that many residents don’t realize the area is a park and not the back yard of Santa Fe Towers apartments.

Greg Ruether, city parks and recreation director, said the adult activity equipment in parks is a trend that has worked in downtown settings.

The changes would draw in more people of different ages, he said. “One thing we heard a lot was to make it multigenerational,” he said. The new amenities would also bring more people to the park who work downtown.

But the park redo comes amidst other big changes to downtown that have made residents uneasy. An apartment building boom has encroached on parking spaces and made homeowners wary about bringing the Farmers Market closer to their streets. The Edison project proposed nearby would provide some extra parking but would also bring more people into the area with its office and restaurants.

Some residents at past meetings said they preferred to leave the park as it is. One man got enthusiastic applause at the meeting for repeating that sentiment.

But others expressed resignation that the city has already made up its mind.

“I think they are going through the motions that they have to go through,” said Cheryl Foster, president of the residents’ association at Santa Fe Towers. Foster believes the city leaders intend to put the market in the park.

About 270 senior citizens live in the towers, many of them disabled, Foster said. Those residents love the quiet area to walk their dogs and enjoy concerts. “If they put the market there it’s going to be noisy, smelly, overly crowded. It’s going to cause a lot of problems,” she said. Residents have already had problems with thefts from cars in the parking lot, she added.

Others at the meeting were more concerned about parking problems. Jewell Bernard said he supports improving the park and is okay with putting the market there. “But if you can’t park, you’re not going to come down and it doesn’t matter what you put in it,” he said.

Likewise Joe Lilley was not against a few modern touches to the park, but felt the downtown parking needs to be addressed first. Lilley said he’d prefer to keep the market out of the park. And Mary Ann and Michael Barber worried that the amenities would overshadow the downtown area’s history and small-town charm.

Ruether disagreed that the city has already decided to move the market. “That decision has absolutely not been made,” he said. Improvements will bring more people to the park but not overrun it, he said. “It’s not going to be swamped with people all day,” he said. But it might get more use from walkers in the area, especially if transit and connections to Matt Ross are improved.

“I think people will appreciate that,” Reuther said.

Councilmember Paul Lyons, who attended the meeting, said something should be done to improve the park. “Not doing anything is not an option. We’re going to do something,” he said.

The consultants will use feedback to whittle down the proposals to two choices to be presented at the next meeting, Aug. 16.