Police say they’re looking for the culprit of an overnight break in that left jewelry cases shattered and broken glass across the floors of the Mission Road Antique Mall in Prairie Village.

Officers responded to a commercial alarm at the mall, which is on the south side of Corinth Square, after 3 a.m. When they arrived, they found that someone had forced entry into the building.

Mission Road Antique Mall owner Casey Ward said it appeared the perpetrator had used a hammer to smash the glass doors of a jewelry display case at the front of the store. The Mall has spaces set up for more than 300 vendors to sell antiques, jewelry and consignment items. Ward said she had reviewed security camera footage of the incident. 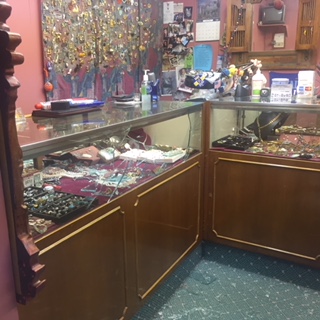 “One man, in black clothing, gloves and a mask quickly unloaded all of the best pieces into a black bag,” she said. “He knew what he was looking for and had obviously done some preliminary ‘casing’ of the Mall, because after he cleared out those front cases, he proceeded to the back of the Mall, where Galleria Jewelry’s store is located. He smashed through her sliding glass door, entered and smashed the glass on her fine jewelry case, cleaning it out as well.”

Casey said the video showed the break in occurred at about 3:11 a.m. Police and the business owner were on the scene by 3:20 a.m., but the thief was gone.

“He exited through one of the Emergency Fire Exits, setting off those alarms as well,” Ward said.

Anyone with information about the theft should contact Prairie Village police at 913-642-5151.