The more than 1,200 homes and businesses that sit within a half mile of the busy railroad crossings in Lenexa’s Old Town should be in for some relief in the coming year or so.

The city council has approved the expenditure of $350,000 on a new wayside horn system for the crossing that will substantially reduce noise pollution from the train horns that are required by law to blast as the moving trains approach crossings with roads.

Lenexa’s move to the wayside signaling system, which will have the horns sound from posts mounted alongside the tracks instead of from the trains themselves, would dramatically reduce the spread of the horn noise. About 30 trains per day pass through the crossings at Noland Road and Pflumm Road along Santa Fe Drive, with the horns emitting ear-splitting blasts for blocks in every direction.

Here’s a look at the spread of the signal noise under the current system: 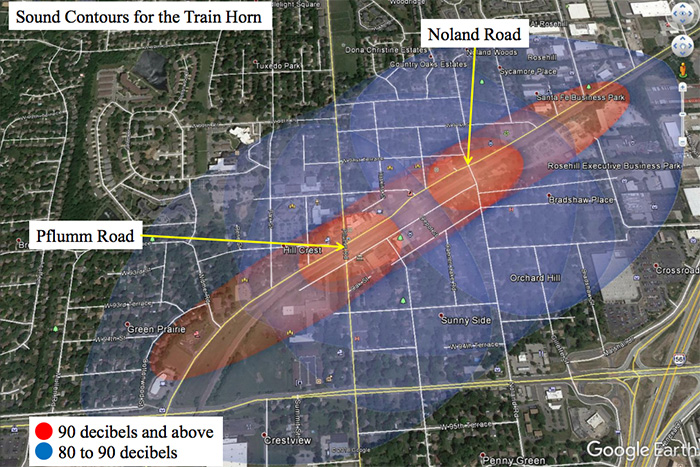 And here’s a look at the reduced contours with the wayside horns, which send concentrated signals in the direct vicinity of the railroad crossing: 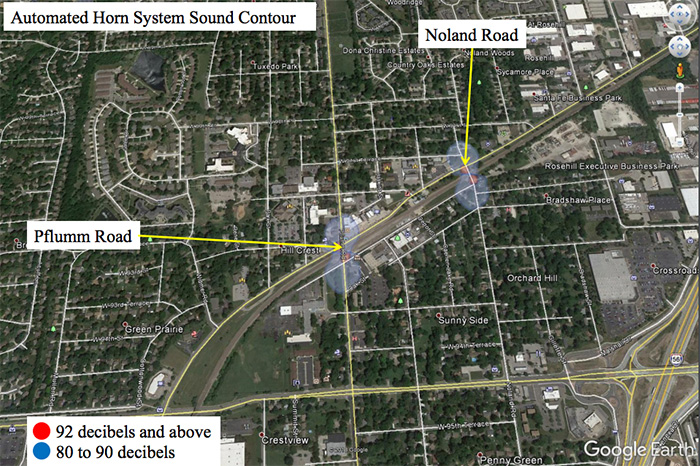 Lenexa tested the wayside signals last month. The city expects the installation process to take a year or so, as it works with BNSF Railroad on the installation of the system and the move away from signals from trains.

Merriam recently made the transition to wayside horns at rail crossings near its downtown area.