For the first time in Mission history, one of its very own police officers has received a Purple Heart Award.

“Who knew I would get an award for getting punched in the face?” Officer Samantha Kunzler joked.

The Purple Heart award goes to officers and military service members who are injured or killed in the line of duty. The Mission Police Department elected to bestow this award to Kunzler for her fortitude and dedication to service when she was attacked on patrol.

Kunzler was six weeks into her training as an officer March 9 when she and her field training officer, Nathan Fleming, got a call from dispatch around 9:30 p.m. The duo were headed to a residence on a report that someone had possibly experienced a medical overdose and suicidal ideation.

When they stepped out of their police car, they heard glass breaking, and dispatch said the man was possibly trying to escape. After running into the house and speaking with the man’s mother, who had called 911, the officers found the man in his bedroom, completely unclothed and incoherent. He was exhibiting signs of “excited delirium,” commonly seen in people under the influence of narcotics.

They tried to calm him down and asked to sit on his bed, Kunzler said. But the situation escalated in a matter of minutes.

“When I do think back, it goes in slo-mo to me,” she said. “I think, ‘What could I have done differently?’”

While she started to put on rubber gloves, the man punched Fleming in the face; seconds later, he threw a “haymaker punch” to the side of Kunzler’s face, completely breaking her nose and dislocating her septum.

“Blood was pouring like a waterfall out of my nose; I had never seen that much blood come from my body before,” she said. “I knew at that point I was injured, I just didn’t know how bad. I didn’t feel anything. My only thought was we need to get this guy under control.”

Adrenaline surging, she managed to call in more units — Fleming’s radio had been knocked away during the fight. They finally got the man under control, and Kunzler was taken to the emergency department shortly after other officers arrived. Fleming was also slightly injured in the fight when a lamp fell on his head and scraped him, and he fell to the floor and cut his knee.

“Being in training, you never know how someone’s going to act in that situation,” Kunzler said. “Some people have been known to shut down and not get in a fight, so I think it spoke a lot to my character, that I was willing to get into a fight and held my own and backed [my parter] up. He wasn’t there fighting alone, after I was injured.”

Kunzler has two years’ prior experience working in the jail and in dispatch with the Johnson County Sheriff’s Office. Her position as officer in Mission is her first patrol job.

Captain Dan Madden said everyone at the police department was impressed with Kunzler’s performance that night.

“I think as awful as it is that it happened, that’s something she’ll carry with her the rest of her career,” Madden said. “Everybody’s pretty impressed by her willingness and eagerness to get back to work.”

The fight was not even the craziest part for Kunzler. Her reconstructive surgery actually was.

What was supposed to be a 20-minute outpatient procedure to restructure her nose turned into four days in the hospital for pneumonia. She’s still not quite sure what happened, but her surgeon said Kunzler aspirated blood during the surgery and most likely had an allergic reaction to the anesthesia. Her oxygen levels reached 60 percent — normal O2 levels are in the 90s and 100s — and she started crashing on the table.

They intubated her and transferred her to the emergency department at Overland Park Regional; she eventually woke up hours later to several doctors surrounding her, a tube down her throat to help her breathe.

“I thought I was suffocating; I literally thought that was how I was going to die,” Kunzler said. “I know it sounds funny because they never would have let that happen, but I just I felt like I could not breathe.

“That was the first time, in this whole situation, from getting my nose punched to now, to where I was ever panicked. I never lost my cool in all of it and this was the first time I thought, ‘This is how I’m going to die, with all these doctors staring at me.”

She fully awoke hours later, surrounded by family. Throughout the whole ordeal, she has felt very supported by everyone at Mission Police Department.

“I’ve never been so grateful for having my coworkers that I [have] now, support me in all of this and have my back,” Kunzler said. “And now, we make fun of it and it’s a joke around the office, but that’s OK because that’s the kind of person I am. It happened, it’s time to move on, that kind of thing.”

Kunzler completed her police training in May, after a month’s delay due to her recovery. 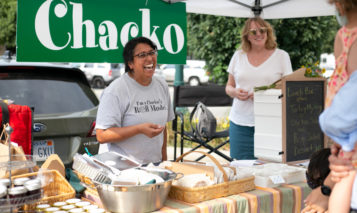