Prairie Village residents’ perception of the quality of life in the city and satisfaction with city services put it among the most desirable places to live in the Kansas City metro, according to the results of a comprehensive survey fielded by the ETC Institute this spring.

But residents are concerned with the trend of teardown-rebuild projects in the city and how those projects impact neighborhoods.

Among the topline findings from the survey, which was completed by a random selection of 704 households, are:

The following chart produced by ETC summarizes Prairie Village’s performance relatively to metro and national averages in the major categories: 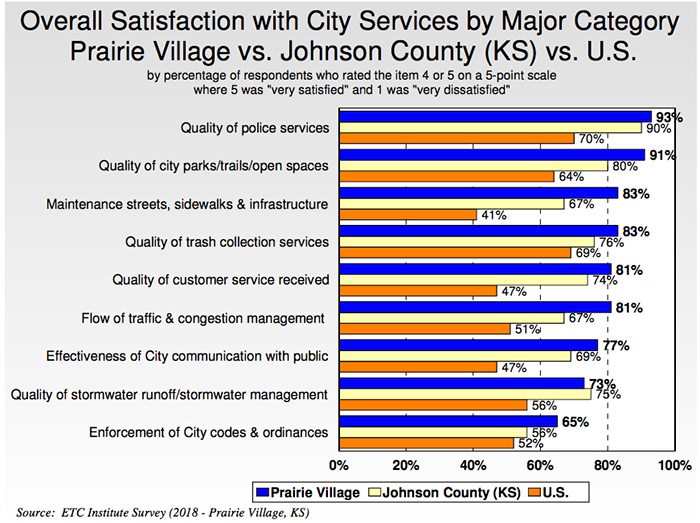 But many residents expressed a concern with the effect the wave of teardown-rebuild projects that have swept through the city over the past five years was having on Prairie Village’s character.

Fifty-two percent of survey respondents said they were concerned with teardown-rebuilds.

In open-ended comments submitted by hundreds of survey participants, residents said they thought the new homes were too big for the lots on which they were built, and that they were impacting the “charm” of the city’s post-war architecture.

“The scale of the rebuilds is ludicrous,” said one respondent. “Many rebuilds leave very little green space and tower over the neighboring homes creating an eyesore for the street.”

“At the rate homes are being purchased and knocked down, pretty soon it will be too late to preserve the unique identity that really differentiated Prairie Village from the rest of Johnson County, and was a reason to move here rather than Overland Park,” said another. “Especially given the SMSD is now third behind Blue Valley and Olathe, there are increasingly fewer reasons to choose Prairie Village over Overland Park given what is happening now with all the new construction.”

Just 63 percent of respondents in the survey said they were satisfied with perceptions of how well the city is maintaining growth.

Mayor Laura Wassmer acknowledged the issues in a message that accompanied the city’s release of the results.

“There was also significant feedback about appropriately managing the teardown and rebuilds of our housing stock so that the character of the Village is not lost,” Wassmer wrote. “Rest assured that these continue to be top priorities for the City Council and myself as well.”

The city passed a set of basic design guidelines in 2016 that regulated building height and setbacks in an effort to address concerns about homes being too big for their lots. But several residents say those guidelines didn’t go far enough, and the city is currently considering additional regulations that would address aesthetic concerns.

City officials said their takeaway from the results was that the following issues should be top priorities for the council and staff in coming years:

Overall, residents gave the city’s communications efforts fairly high marks, with 77 percent of respondents saying they were somewhat or very satisfied with efforts to inform residents about local issues. But the survey highlighted an area that appears to need some attention in the future: Less than half of respondents — 49 percent — said they were satisfied with the level of public involvement in decision making.