Each legislative session, we provide the Shawnee Mission area’s elected officials with the chance to share their thoughts about what’s happening in the state capitol. Rep. Nancy Lusk, Rep. Randy Powell and Sen. Mary Pilcher-Cook were scheduled to send updates this week. (Rep. Powell did not respond to our invitation to submit a column. Sen. Pilcher-Cook asked to postpone her column given everything at play in the Senate today with the K-12 bill).

The legislators who are consistently critical of public education are unhappy, not surprisingly, with the increase in K-12 funding over the next five years that passed in the Kansas House Saturday. In judging the new school finance bill, they have a favorite tactic of totaling all the increases for each of the coming five years instead of evaluating the increase on an annual basis of reaching a targeted goal. With that approach, they say the increase is over $2 billion, which is an effective number to achieve the sticker shock they desire.

I will agree – it is a shocking number. But an apples-to-apples comparison is needed to see a trustworthy big picture, and not just their spin.

I am married to an attorney who practices family law. In his practice he does a fair number of divorces and has often dealt with resolving child support issues. There is a lawyerly term for money that is past due but not paid, and that term is “arrears.”

I began to wonder what the “arrears” number would be for all the education child support money that was due the children of Kansas, but not paid, over the past five years. How delinquent has the state been?

Starting with the number of the base state aid per pupil funding at the last time it was constitutional (FY2009) we can make a comparison by calculating the difference between the numbers of what should have been paid, and what was paid in each of the past five years.

Here’s a chart summarizing the calculations: 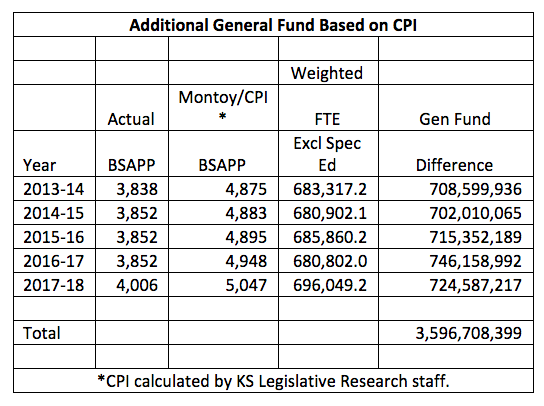 We have shorted K-12 public education by almost $3.6 BILLION in the last five years! Talk about sticker shock. Somehow the $2 billion figure being thrown around by the ultra-cons has lost its punch.

And don’t forget inflation. Looking forward, what would the number be if a low 1% annual inflation rate was assumed for the next five years? $3.77 BILLION. For a 1.5% inflation rate? That’s $3.85 BILLION! Divide that number by five and you will get an approximate amount of what the state should be paying annually to avoid future “education child support arrears.”

How did we get not only our schools, but the rest of state government, too, in such a huge hole? Answer: the state’s five-years-long fiscal crisis caused by the failed Brownback/Colyer 2012 tax policy. A majority of legislators, myself included, were able to reverse that ruinous course last year. But all is not fixed, as evidenced by the pending lawsuit and the numbers given here.

Your understanding of the entire dire situation is needed. Please do not be played by false sticker shock spin. Give your support to those of us who are working toward real solutions.