For the past three year, a diverse group of Shawnee Mission West students have come together to share a love of sports.

Through the Special Olympics Unified Sports program, SM West students with and without intellectual disabilities pair up to play on the same sports team, fielding basketball squads in the fall and soccer teams in the spring.

And on Monday, some of the players with special needs got to experience a rite of passage for high school athletes: getting a letter.

This past fall, current program sponsors Kari Hoback and Kimberly Morris approached SM West athletic director Todd McAtee about the idea of creating a path for the Special Olympics players to earn an athletic letter. To be eligible, the special needs students would have to complete two seasons in a sport, attend at least 75 percent of practices and games, show good sportsmanship, and finish the season in good standing for both academics and attendance. McAtee and district athletic director Dick Kramer approved the proposal, and at this week’s SM West PTSA meeting, four students received the school’s first-ever athletic letters through the program.

Though most of the students who participate attend SM West, the team is also open to former Vikings who now attend the district’s 18-21 program housed at SM South. The partner athletes are mostly students who work with special needs students as cadet teachers under SM West’s Ann Flora.

The Unified Sports program was founded at SM West by PTSA member Dawn Lalumondier, and has grown quickly. The program now hosts the metro area’s fall Unified Basketball Tournament, bringing more than 20 teams and hundred of athletes, coaches and volunteers to SM West for the event. 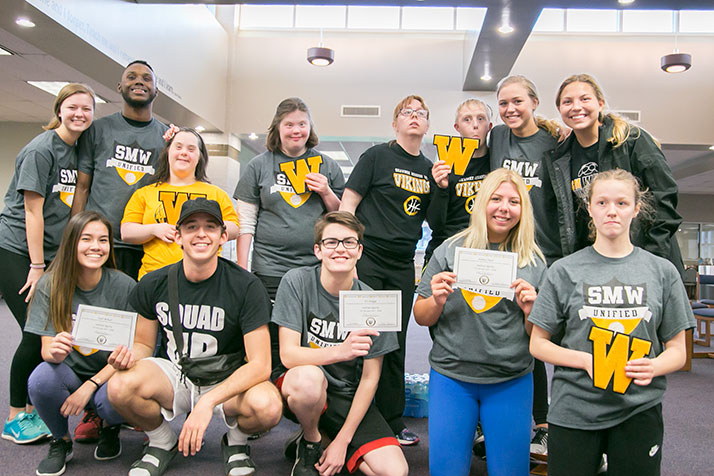