This is a breakout test right here.
[/breakout_right]
[/breakout_wrap]The selected condensed logo features a collection of trees, the silhouette of a home, “RP” and the phrase “est 1951.” The logo will be used on surfaces like street signs, vehicles and shirts.

The design serves as an abbreviated version of the full logo approved by the previous city council in late 2017. The branding was designed to evoke a sense of community, home and neighborhood, said Vireo designer Lindsay French.

Councilmember Tom Madigan said he thought the “RP” would have greater readability than the spelled out “Roeland Park” offered in the two other condensed logo options.

Councilmember Becky Fast said she had concerns the design was not condensed enough for small surfaces like a street signs.

Fast also voiced concerns with the bright green color used in the design.

French reminded Fast that the color was within the palette approved during the logo concept process.

The majority of councilors signaled their approval for the design but asked that a few additional versions be presented at the next workshop.

Michael Poppa requested seeing a version of the design in black and white.

Here is a rendering showing the condensed logo and how it would appear on street banners: 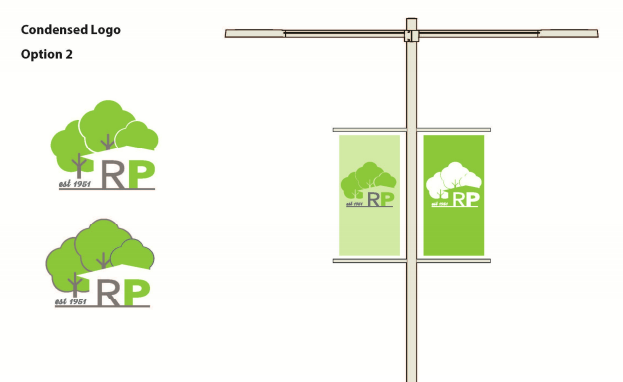