The new building will contain 181,680 square feet and will be built on an undeveloped parcel at the southeast corner of Penrose Lane and West 88th Terrace.

Kiewit spokesman Bob Kula said the building would cost about $43 million and the parking garage expansion about $7.5 million. JE Dunn is the project’s general contractor.

Kiewit expects to break ground on the project in the third quarter of this year and complete it by Jan. 1, 2020. The company intends to seek tax-increment financing for the project from the city at a later time.

Kiewit recently bought two adjoining buildings from Lexmark Properties at 89th and Renner for an undisclosed amount. These buildings, formerly the headquarters for Perceptive Software, and the new building will constitute its regional headquarters campus in Lenexa. Combined the campus will contain about 385,000 square feet.

The company anticipates adding another office building, from two to five stories high, on an additional lot on the site at an undetermined time. The lot will function in the meantime as a plaza and green space on the campus.

The parking garage has about 1,300 stalls and will have about 1,770 after the expansion, in addition to public, on-street parking.

“We appreciate the support and involvement of Mayor Boehm and city officials during this important process for helping us pursue a potential new state-of-the-art campus in Lenexa,” the company said in a written statement. “With more than 1,200 construction, engineering and support employees already in the greater Kansas City area, Kiewit’s presence continues to expand, including adding more engineering talent this year to support our growing work in the power market. We look forward to continuing this process to secure a mutually beneficial agreement for the city, Kiewit and our employees.” 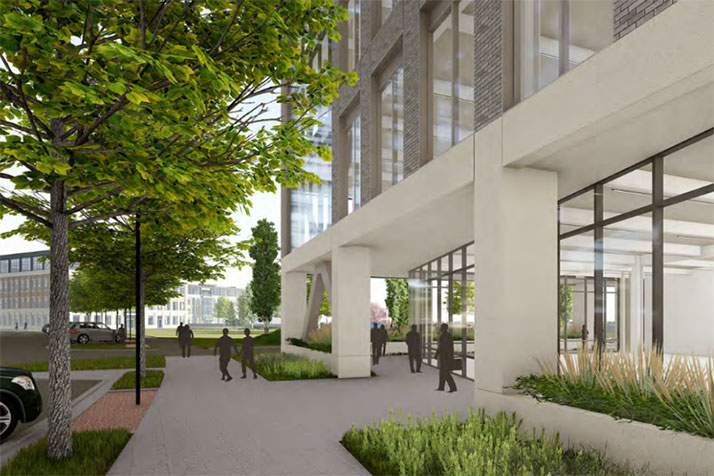