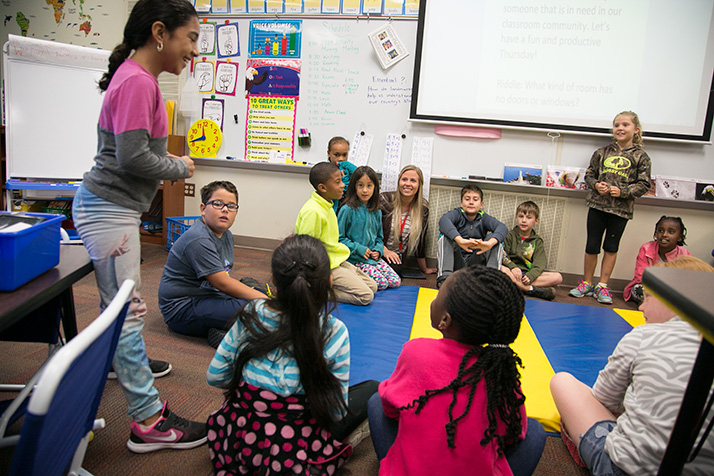 After moving to the Kansas City area from the east coast and enrolling her daughter in school, Bernie Winston started to hear stories from other families with minority students at Shawnee Mission schools.

“There were these cases of race coming in to play and it not seeming like there was a way to address them or any training on diversity and inclusion,” she said. “We were a little hesitant at first, but there was a need to address the issue.”

So in 2014, Winston approached SM East principal John McKinney about starting a diversity committee at the school that would bring students, teachers, parents and others together to improve the cultural climate and provide community members with tools to foster inclusion. McKinney embraced the idea, and working with teachers David Muhammad and Samantha Feinberg, the group starting efforts on an number of fronts. They organized training events for staff, cultural events with students from SM East and other schools, and started tracking the number of race-related incidents at the school as well as the academic performance of a range of student groups.

And now the group is hoping that the time is right for the district as a whole to begin investing time and energy in accommodating Shawnee Mission’s changing demographics.

Over the past year, and with the help of national firms that specialize in diversity and inclusion training, the SM East area group has developed a 30-page strategic plan for Shawnee Mission to improve the cultural competency of administrators, teachers and students — and it has high hopes that the arrival of a new superintendent will provide an opportunity to see some of its recommendations come to life.

Incoming superintendent Michael Fulton’s work to create a plan to address changing demographics in the Pattonville area in the late 1990s appears to be one of the factors that attracted the Shawnee Mission board to him as a candidate. The SM East area group is hoping that experience will translate to Shawnee Mission.

“Dr. [Michael] Fulton has experience with addressing diversity in the past and it looks like he’s positioned to embrace diversity and inclusion efforts here,” Winston said. “We’ve had a lot of significant gains at the building levels where we’ve been active the past couple years. What we’re looking to do now is put a long-term, sustainable plan in place for the whole district. Because our demographics are going to continue to change.”

Among the group’s recommendations are:

Debbie Williams, a Fairway resident whose kids graduated from SM East in the early 2010s, has been closely involved with the group from its inception. She said the benefits of such an approach would extend far beyond minority students, preparing all Shawnee Mission students for the diverse world they will enter when they leave high school.

“Shawnee Mission schools are great,” Williams said. “But adding this layer would make them yet more excellent. And it’s something that would be to the benefit of all students. We want to make sure all students are prepared for the world outside after they graduate.”

The group says it hopes to present an overview of its plan to the board of education this summer after Fulton has arrived.

“We have some new members of the board and a new superintendent coming,” Winston said. “So this is an opportunity for everyone to take a fresh look at this issue.”