Johnson County government officials on Thursday got a look at updated designs for the new nearly-$200 million courthouse to be built across from the existing facility. 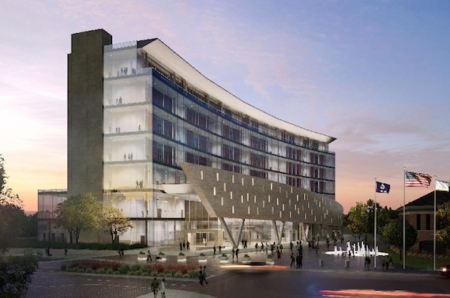 The updated schematics follow a months-long process during which county officials and designers worked to address concerns about the original concept, which had been criticized as out of place in downtown Olathe.

The new schematics show a building that is seven stories high and will initially accommodate 28 court rooms. The building could be expanded to accommodate 36 courtrooms at a future date.

“This facility will resolve key issues with the existing courthouse, providing a safe and secure environment, with necessary setback from the street, appropriately designed with efficiencies and function to carry out justice with accessibility and compliant with ADA, while meeting our judicial needs for more than 75 years,” said county chair Ed Eilert.

“The design of the new courthouse expresses the significance of the judicial branch of democracy in our community for the 21st century,” said Assistant County Manager Joe Waters. “This building effectively relays the transparency, equality, permanence and seriousness of the business to be conducted within its walls, while creating a welcoming atmosphere for our residents.”

The county plans to submit design plans for formal consideration to the city of Olathe in March. The current timeline calls for groundbreaking in July with construction completed in 2021.

The presentation also included an video rendering of the facility from above: