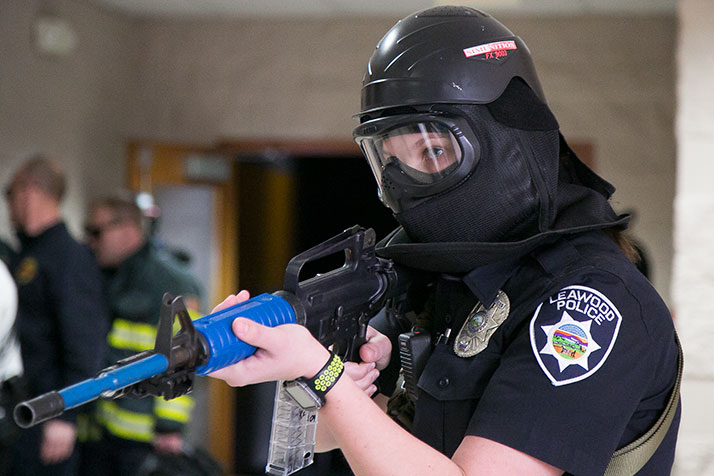 The annual northeast Johnson County inter-agency active shooter training had already been on the books for months when a former student entered Marjory Stoneman Douglas High School in February and murdered 17 people.

But that shooting, which has reinvigorated the national discussion about how to keep schools safe from gun violence, highlighted the need for emergency responders to be prepared for any situation.

Organizers of the training had already planned to run officers through scenarios where they were the first responder on the scene when they started scripting out this year’s exercises in November. The controversy around the decision of the Parkland campus officer at the scene not to enter the building after the shooting started made those scenarios all the more relevant as officers went to work this week at Antioch Church in Overland Park.

“There has been a lot of focus on should that officer have gone in or not gone it,” said Leawood Police Brad Robbins. “Every situation is so fluid, it’s tough to predict what’s going to happen. We at least want to subject our officers to it, let them see it, and let them formulate in their minds how they are going to respond.”

This year’s scenarios also put officers in situations where they had to work in low-light situations.

The training, which brings together police officers from the cities of Westwood, Fairway, Leawood, Merriam, Mission, Overland Park, Prairie Village, Roeland Park as well as from the departments for the Shawnee Mission and Blue Valley School Districts to coordinate with emergency responders from Consolidated Fire District #2 and the Leawood Fire Department, is held each year during the Shawnee Mission School District’s spring break.

In the past, it’s been held at a school. But Robbins said using a facility like Antioch Church helps acclimate officers and medical responders to different situations.

He stressed that the hope is that none of the local emergency agencies will ever have to put the training to use. But it’s imperative the departments know how to collaborate to respond to such an emergency.

“More and more in our society today, people are solving issues through violence, and often gun violence,” Robbins said. “We are trying to prepare our officers as best we can to respond and minimize the loss of life.”