When Jo Marie Scaglia was growing up in Kansas City, her mom would cook up a veritable feast every Sunday at 3 p.m., setting out dishes of delicious, straightforward food for the taking.

“Everyone was invited — family, friends, neighbors, whoever,” Scaglia recalls. “Even after I moved out my friends would still be showing up at the house Sunday afternoons.”

After leaving home, Scaglia went on to follow in her forebears’ footsteps to become a restaurateur, launching the first of her popular The Mixx restaurants in 2005. But as that concept, which focuses on salads, grew, an idea for a different kind of restaurant started percolating — one that would recapture the spirit of conviviality that marked those Sunday dinners growing up.

Today, that vision opens to the public in the form of Caffetteria, Scaglia’s new restaurant at the Village Shops.

“The word in Italian means a meeting and gathering place for friends and family over food,” she said of the restaurant’s name. “It’s more of a community-centered place than a mess hall.”

Located in part of the space where Bruce Smith Drugs operated for six decades, the restaurant features a bright interior with touches that draw on mid-century design and architecture. The open kitchen is at the center of everything, allowing diners to see the cooks at work making their food.

The interior currently seats about 100 — but Scaglia has plans to build a patio that will go around the restaurant and spill into the Village Shops courtyard.

“The idea is that mom and dad could be inside having a cocktail or coffee on the couch and the kids could be out in the courtyard,” she said.

A coffee bar at the front of the house will make an array of coffee drinks, and the restaurant also has a craft soda machine from Stubborn that features beverages made with real cane sugar. (“I don’t even drink soda, and that machine is going to be a problem,” Scaglia joked.) They’re still waiting on their liquor license, but Scaglia says she’ll be offering craft beers on tap as well as an array of Bloody Marys and champagne cocktails.

The space is designed to encourage people to take the time they need, but the operation is also set for quick service. People order at the counter and have their food brought to them.

“I’m always on the run,” Scaglia, who lives just a few blocks from the restaurant, said. “I don’t necessarily have time for a fully served sit down meal. So we’re geared to quick service. And there’s no tip involved, so there’s a cost saving there.”

There’s also a marketplace up front where people can pick up grab-and-go items.

Caffetteria is open Monday through Saturday from 7 a.m. to 9 p.m. for breakfast, lunch and dinner service.

The restaurant will be open Sundays from 7 a.m. to 5 p.m. 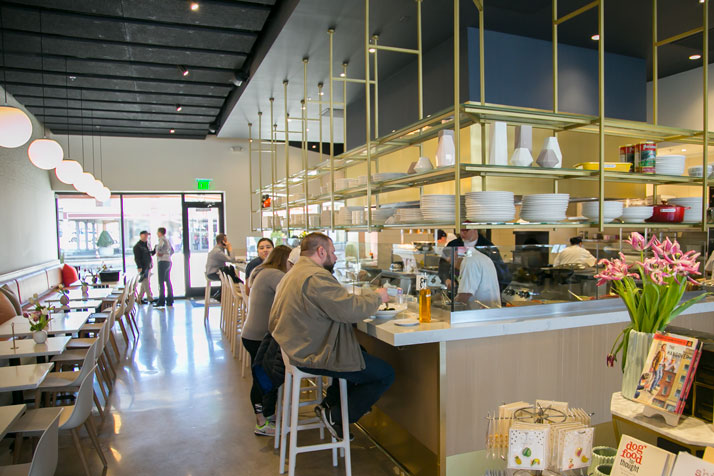