UPDATED: Curtin Property Company informed the city Friday afternoon that it would postpone the scheduled rezoning hearing until the planning commission’s April meeting. So the plan will not come before the commission on Monday as had been previously scheduled.

Ahead of scheduled rezoning hearing Monday, Overland Park city planners have issued their professional comment on the latest plans for the proposed $1.8 billion redevelopment of the Brookridge site.

Property owners at Curtin Property Company have asked the city to rezone the land currently occupied by a handful of single family homes to a classification that would allow retail, office, residential and entertainment uses. In their latest request, they’ve indicated to the city that they plan to build three new commercial buildings and a new golf clubhouse at the southeast corner of the intersection of 103rd Street and Antioch.

In their report to the Planning Commission, city staff say they don’t believe the changes to the plans should have any material effect on traffic levels because the new proposed buildings at 103rd and Antioch would replace commercial square footage that had been planned for other sections of the project site.

“In other words, traffic that would be generated by the new retail should be offset by reallocating approved retail from elsewhere in the development or with an equivalent amount of traffic generated from other uses with a reduction in office square-footage or multi-family units,” reads the staff report.

But staff said they were not convinced Curtin’s latest proposal to phase-in infrastructure improvements to the site was acceptable, saying that as much of that work as possible should be completed all at once to reduce the disruption of the surrounding neighborhoods.

“Staff does not support the applicant’s request to additionally phase the infrastructure improvements because it prolongs the inconvenience and disruption to surrounding property owners and the traveling public and requires improvements to occur as traffic is increasing with the development of the project,” reads the report.

The report also raises concerns about site access during construction, indicating that the developer needed to come up with a plan to make the primary access point to the development via Antioch Road and not 103rd Street.

“Full access to Antioch is critical to serve any portion of the development,” reads the report. “It is staff’s belief that all discussions during previous approval envisioned primary access being obtained from Antioch in support of the determined main flow of traffic to and from the development.”

The Planning Commission will review the rezoning request at its Monday meeting. The meeting begins at Overland Park City Hall at 1:30 p.m., but staff say the Brookridge rezoning item will not begin before 4:30 p.m. The item requires a public hearing, meaning members of the public will be able to voice their support or opposition for the request before the Planning Commission.

A group of Overland Park residents have organized opposition to the Brookridge redevelopment plan for the past few years, saying it won’t fit in with the surrounding residential neighborhoods, and questioning whether the city should be offering public finance incentives to Curtin for the project.

Here’s a look at the latest version of the master plan for the site (you can click it to see a larger version): 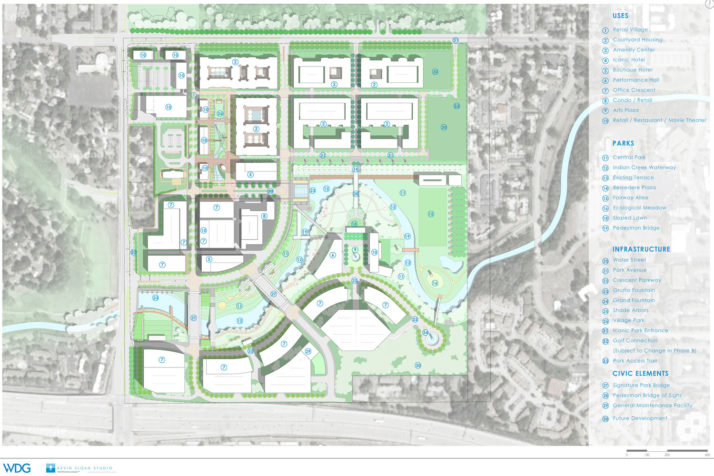 And here’s the previous version of the master plan, prior to the inclusion of the home sites in the northwest corner of the project site: 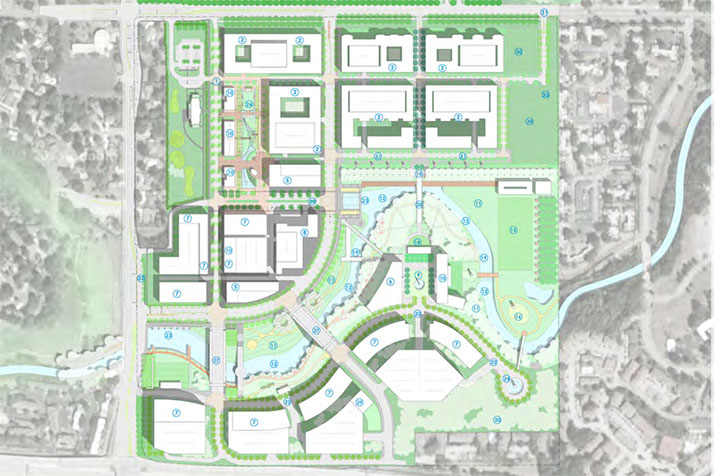