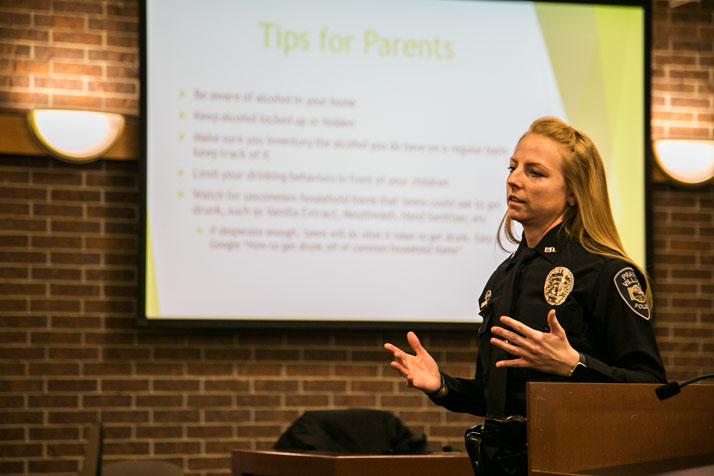 Substance use issues that start during adolescence can derail teens’ early lives, sparking mental health crises and addiction issues that pose a threat to their survival as they become young adults.

That was the message a group of law enforcement and substance use disorder specialists gave Wednesday at a community discussion hosted by the Prairie Village Police Department and First Call, the area’s alcohol and drug prevention and recovery agency.

The student resource officers who serve Shawnee Mission East and Indian Hills Middle School discussed the substance use trends they have witnessed in recent year among adolescents. They said that they’ve seen more and more students using prescription medications like Xanax during the school day, a practice that can be attractive to young people because it is difficult to detect.

They have also seen more teens loading marijuana derivatives into vaping devices, like the new Juul vaporizer that appeals to young people because of how discrete it can be.

But the officers noted that alcohol continues to be the first substance most teens try, and one that can pose serious legal and health risks. The officers recommended parents be aware of their own alcohol use in the home, and try to keep any alcohol in the house inaccessible to their kids.

Chris Rosburg, who spent his 20s addicted to alcohol and drugs, shared his story of increasing substance use and recovery to highlight the fact that the issue can affect anyone.

Rosburg noted that he was a “good kid” from a tight knit family, and that from the outside it might have seemed unlikely that he would become crippled by drug addiction. He started drinking in high school and his drinking became heavier and heavier through college. He began using drugs around the time he graduated, and had become a daily user by the time he was 27. After collapsing after a weekend of heavy use in his early 30s, he went into rehab and began his recovery.

He said he couldn’t have imagined the positive life he has today during his time as an addict. He’s been sober for the past eight years.

“I’ve got an amazing wife. We’ve got a 14 month old daughter. We’ve got a son on the way,” he said. “None of that would be possible if I was still drinking…My life the past eight years has been nothing short of remarkable.”

Full video of the event is embedded below. (Note that the sound isn’t great in parts).

Education is the Best Prevention: A Town Hall Meeting