Sometimes you come across an image that just stops you in your tracks.

Stops you in your tracks and makes you fully appreciate what a gift we have in life, how grand it is that we — intricately fused collections of stardust from the cosmos — find ourselves conscious beings on this green and blue marble floating through space.

For me, this was one of those images: 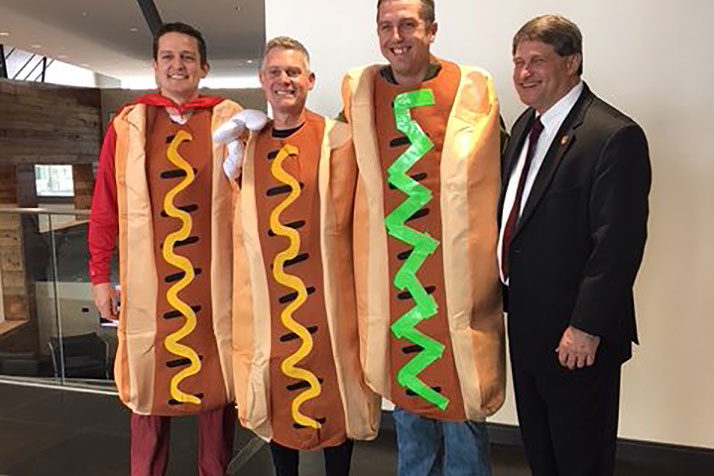 Recently named Shawnee Mission Superintendent Michael Fulton was in town this week meeting with district officials and getting acclimated to his new post when he ran across three elementary school principals in the halls of the Center for Academic Achievement. They were Brookwood’s Kevin Frick, Rosehill’s Cory Strathman, and Trailwood’s Greg Lawrence. And they were dressed as hot dogs. (The photo above was posted by Frick on Twitter).

The three schools challenged their students to read as much as they could as part of the Read Across America challenge. And as a reward to the students for amassing a collective 180,780 minutes hitting the books, the principals agreed to stage a series of foot races — wearing the hot dog costumes.

Here are the principals explaining in a video produced by the district:

We congratulate the Brookwood, Rosehill and Trailwood students who collectively read 180,780 minutes in one week for Read Across America. As a result, their principals will take part in a hot dog race. @FrickKevinfrick @Strathman_SMSD @trailwoodsmsd pic.twitter.com/N6wpuFiLaA

It was a remarkably balanced contest, with each principal taking a victory ?