A discussion at Monday’s Prairie Village City Council meeting highlights the conundrum that governing bodies across the Shawnee Mission area will be facing in the coming months: How to address the steep increases in valuation many homeowners are seeing in their 2018 appraisals from the county.

On the one hand, some officials are expressing concern about how 2018 valuations and an accompanying increase in property taxes would affect homeowners, particularly those on a fixed income.

On the other, many northeast Johnson County cities have deferred recommended infrastructure projects or pension contributions during the lean years of the Great Recession, and have significant catching up to do.

At Monday’s meeting, Prairie Village finance director Lisa Santa Maria gave an overview presentation of this year’s budget process, as well as the capital improvement projects that the city could undertake in 2019.

Under state law, the city must submit its 2019 budget — including its property tax rate — to the county by the end of August. The tax rate the city sets in that budget will go into effect in January 2019, which is when homeowners who saw sharp increases in valuations would notice a change to their property taxes.

During Santa Maria’s presentation, a number of councilmembers brought up the recent valuation notices.

Councilmember Brooke Morehead said she was worried that the increases in valuation would be seen as a hardship for some residents who are “burdened with a tax bill” that they can’t afford. She urged the council to approach budgeting the projected revenues from property taxes with a great deal of caution.

Mayor Laura Wassmer noted, however, that the city had put off hundreds of thousands of dollars worth of recommended investment in city streets over the past 20 years. Other members of the governing body pointed out that the city’s police pension program is not sufficiently funded.

“In many ways we are still way behind. We are still so far behind in what we should be putting into our streets,” said Wassmer. “I’m very sensitive to the homeowners, especially those on fixed budgets. But I’m also looking at the long term health of the city and what we have had to sacrifice when the years haven’t been this good.”

Here are the slides Santa Maria presented showing what percent of a homeowners taxes go to different taxing entities for people who live in Prairie Village, as well as an average homeowners tax bill for the current year: 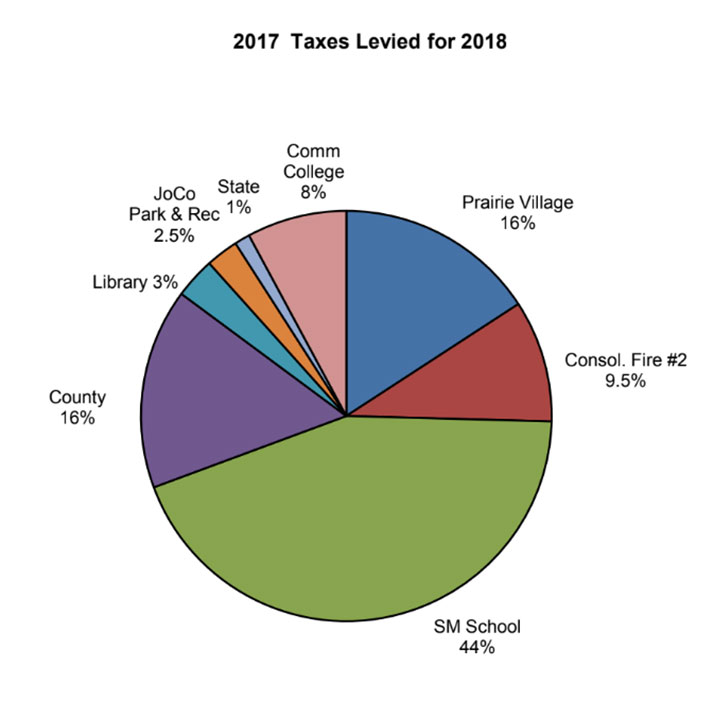 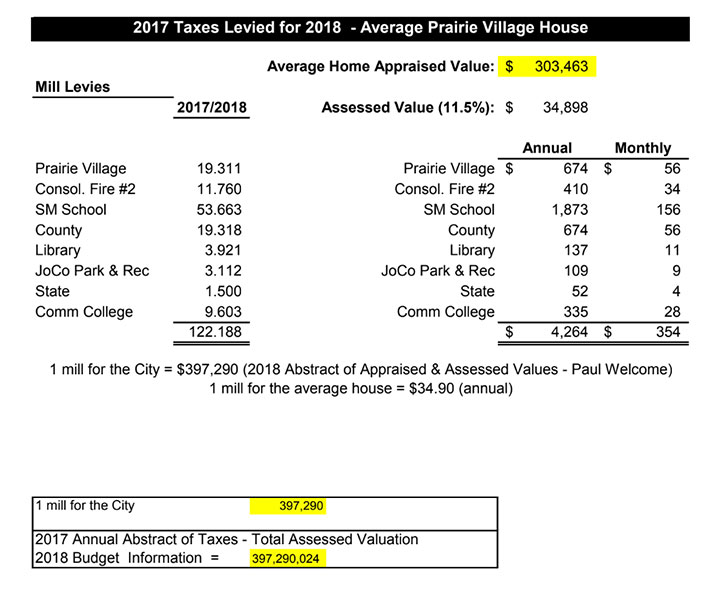