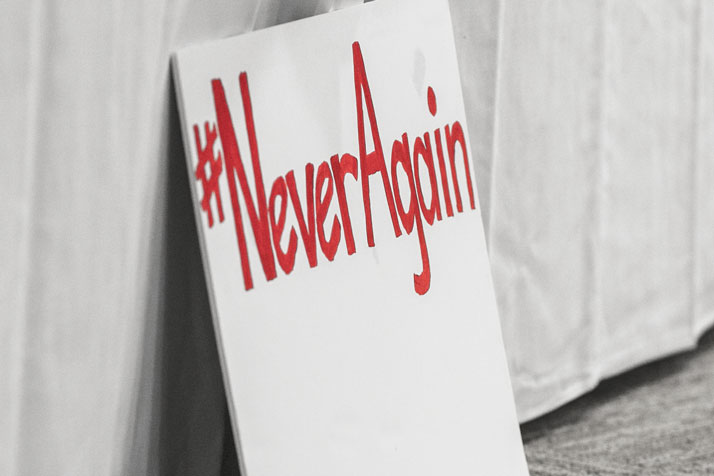 A group of Shawnee Mission high school students are helping organize local efforts in support of gun reform in the wake of the Parkland shooting that killed 17 and wounded 14 more.

SM East students Robbie Veglahn and Sam Fay were among the metro-area high schoolers who gathered Saturday night to coordinate efforts in support of the March for our Lives March 24 and the National High School Walkout Day April 20. Students from SM South and SM North are involved in the coordination efforts as well. Veglahn said students from more than a dozen area high schools are involved in the discussions.

Among the ideas being explored is a civic day of action that Veglahn says is tentatively scheduled for around the time of the March for our Lives, perhaps on March 23. (We’ll publish an update story when the plans are finalized). The group is planning to arrange for Shawnee Mission students to travel to Topeka for the day for a rally on the capitol grounds and a series of meetings with local lawmakers about gun reform efforts students would like to see take shape.

Veglahn said that effort may give students who aren’t able to participate in the April 20 walkout the chance to get involved in the demonstrations. School policy prevents students who miss class from participating in sporting events or other activities in the evening, and there are a number of activities scheduled for April 20.

“We knew a lot of students here wouldn’t be able to miss school April 20, so we wanted to give them another chance to participate in a meaningful way,” Veglahn said.

For students who do want to take part in the April 20 walkout, however, the Shawnee Mission students are encouraging their peers to consider participating in a rally being organized by Blue Valley students at Thomas S. Stoll Memorial Park on 119th Street.

Shawnee Mission East students gathered last Thursday at an optional assembly on school safety, a discussion that was attended by Director of Safety and Security John Douglass and Assistant Superintendent Rick Atha, as well as board members Brad Stratton, Mary Sinclair and Heather Ousley. Ousley said she was struck by how different the experience of today’s high schoolers, who grew up in a post-Columbine era, was from her experience:

Meanwhile, the National Education Association-Shawnee Mission is communicating to members that while it supports students’ rights to “become engaged in civic activities and to participate fully in a free democratic society,” teachers themselves have a contractual duty to remain in the classroom and facilitate student learning: