Strong demand for homes under $350,000 in the neighborhoods east of I-35 have pushed appraised values in Roeland Park and Mission up more than 15 percent on average this year.

With an average change from the previous year’s values of 15.58 percent and 16.25 percent, respectively, Mission and Roeland Park saw the biggest jump in single-family home valuations other than Spring Hill, where the average increase was 16.25 percent, according to data from the Johnson County Appraiser’s Office.

The figures are likely welcome news to homeowners looking to sell their properties in the coming months – but will cause consternation for those planning to stay put, as they represent a significant hike in property taxes. A handful of people responding to our inquiry on Facebook about what kinds of increases they were seeing on their notices reported value hikes of 25 percent or more.

Of Shawnee Mission area cities, Mission Hills and Mission Woods — where the average value of a home is well above $500,000 — saw the smallest increases in average valuation, with each under 3 percent.

Below is a table from County Appraiser Paul Welcome’s 2018 Revaluation Report, which he will be presenting to the Board of County Commissioners this morning, that summarizes the city-by-city value changes this year: 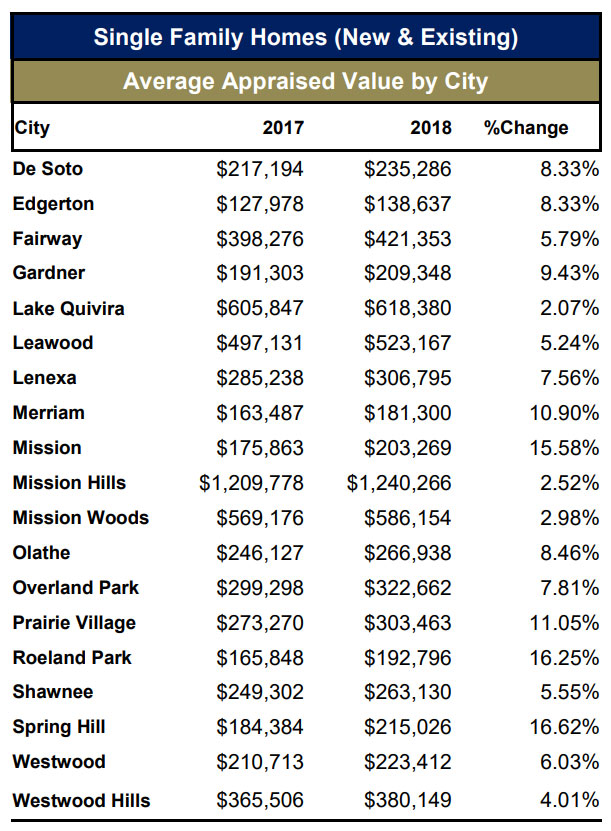