Springsted Senior Vice President Art Davis gave a presentation to the council and led its members through a question and answer session to get thoughts on the most important characteristics they wanted in a new city manager.

Davis asked the council several questions designed to gauge what skills and experience should be priorities in seeking candidates, and what projects would be at the top of the city’s list in the coming years.

Council members expressed agreement on many of their answers, saying they would be seeking a new manager who would:

The council unanimously chose Springsted at its Feb. 12 meeting to conduct a search for a new city manager, for a fee of $24,500 and with a target of the week of May 7 for the city to make an offer to a candidate.

Former City Manager Carol Gonzales submitted her resignation letter to Mayor Michelle Distler on Oct. 9, saying she had accepted a job as director of finance and administration for the Mid-America Regional Council. Gonzales had worked on the city’s staff since 1998 and was named as city manager in 2005. Her final day as city manager was Nov. 15.

Early in Monday’s meeting, Davis — a Kansas City-area native who was Lee’s Summit’s city manager for six years — stressed the importance for any city council “of treating each other with civility and respect in your council meetings, as well as the interaction with staff and the community.” Candidates can be put off by “confrontational interaction” among a council, he said, which could deter them from accepting a job offer.

“It’s as much their assessment of us as it is ours of them,” he said, “so it’s good to keep that in mind as we go forward with the process.”

A proposed timeline for the search process is below: 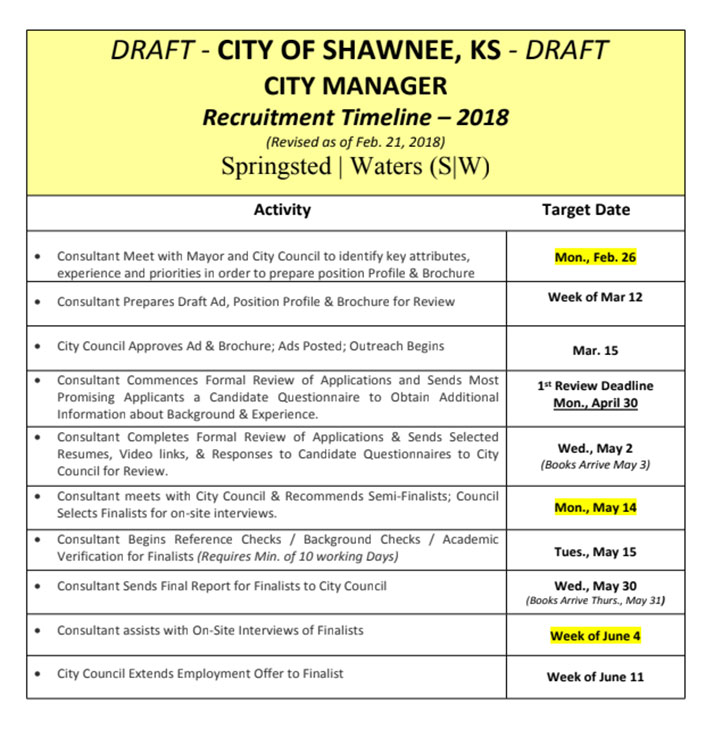