The school shooting in Parkland, Fla., that left 17 people dead Wednesday has drawn into focus one of the sharpest differences between incumbent Republican Kevin Yoder and his Democratic challengers for the District 3 seat: gun control.

In the hours after the shooting, Yoder posted a message on Twitter offering prayers for the victims and their families, and thanking first responders.

Horrific news out of Florida. Praying for the victims, their loved ones, and the doctors and nurses currently saving lives as we speak. Thankful for the heroic first responders who prevented further loss of life today.

Democrats seeking the seat, on the other hand, were quick to call for consideration of gun control measures.

Brent Welder, the Bonner Springs labor attorney, went the furthest, calling for a reinstatement of the assault weapons ban. Here’s his statement:

I am horrified and sickened by Wednesday’s mass shooting of school children in Parkland, Florida. My heart goes out to the victims and their families. I am also extremely angry. Thoughts and prayers are not enough. It’s time for action. I demand that Congress reinstate the ban on assault weapons. Assault weapons were used in the mass shootings of Parkland, Las Vegas, Orlando, San Bernadino, Aurora, Newtown, and in numerous other deadly attacks since the Congress allowed the ban to expire. My opponent, Congressman Kevin Yoder has taken more money from the NRA than any U.S. House member in Kansas. This money has bought his silence on guns. Hunters don’t use assault weapons — mass murderers do. They must be illegal.

Tom Niermann, the Prairie Village teacher, posted a series of Tweets expressing frustration with the lack of action on the part of Congress to address gun violence: 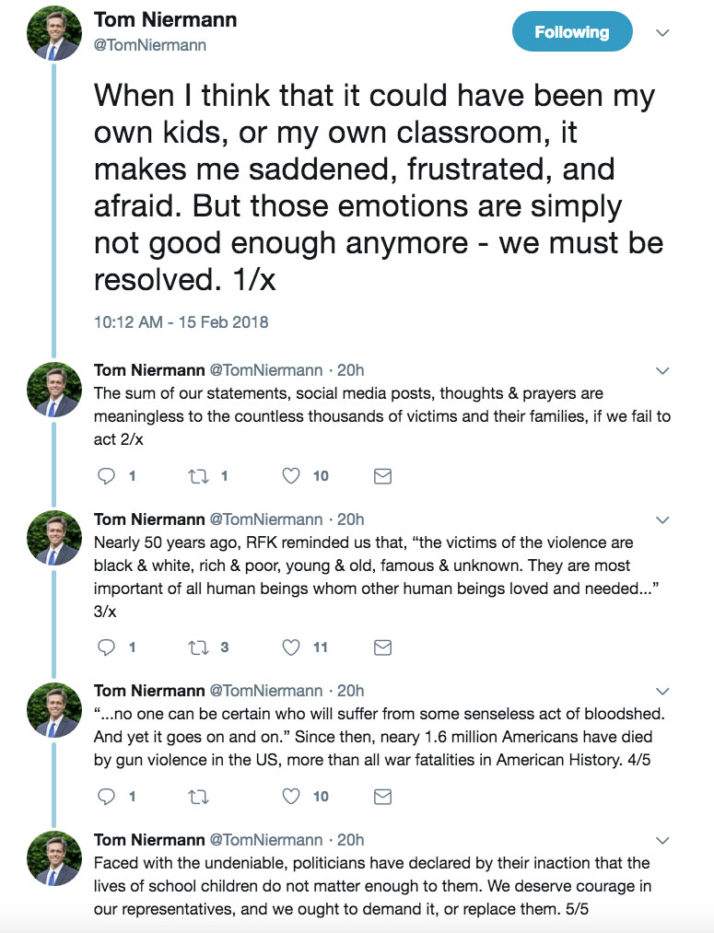 And Sharice Davids, the Shawnee attorney and former White House fellow who entered the race this week, Tweeted that it was time for “commonsense gun safety reform”:

We need more than condolences from legislators. We need swift legislation for commonsense gun safety reform. We can’t allow lawmakers, like Rep. Yoder, who accept big money from the gun lobby to continue sacrificing our safety in exchange for campaign contributions. #GunReformNow

Yoder has received considerable support from the gun lobby in recent years. He was among the top ten recipients of guns rights groups’ contributions to Congressional candidates in the 2016 election cycle, taking in $34,050, according to the Center for Responsive Politics. He’s received a total of $19,900 from the National Rifle Association since he first ran for Congress in 2010.

The four-term Congressman has been a consistent backer of NRA-supported legislation. Yoder voted in favor of the bill signed by President Donald Trump in February 2017 that eliminated an Obama-era rule that would have made it more difficult for 75,000 people with mental illnesses to purchase guns. The White House has consistently refused to released photos from that bill signing ceremony.

Yoder did support restrictions on bump stocks, the conversion that essentially turns semi-automatic rifles into automatic ones, in the wake of the Las Vegas shooting — restrictions that the NRA said it would support.