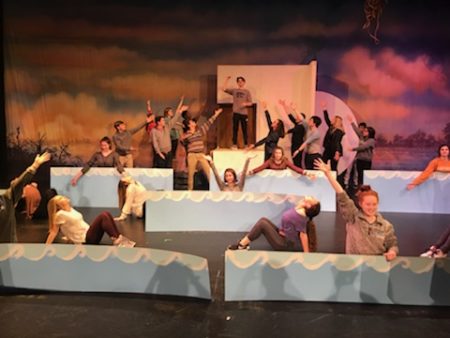 “Curtains” tells the story of a 1950s theatre production trying to crack Broadway when its leading lady is murdered. When a detective arrives to attempt to solve the crime, his love of the theatre comes into focus and he ends up directing the show.

“We chose it because it’s a newer show, only about 10 years or so,” said SM East theatre head Brain Cappello. “It…features some tap dancing, and we have some talented tappers. It’s also a traditional ‘book show’ unlike Suessical last year. We try and rotate styles of shows, and this one is a lot different than that.”

The first show will be Thursday at 7 p.m., with performances Friday and Saturday at 7 p.m. as well. There will also be a 2 p.m. matinee performance Saturday.

Tickets are $10 per person, or free with a current SM East student ID. Tickets are available at the door.