Paychecks for some of Lenexa’s city workers are on their way up.

The Lenexa City Council unanimously approved a resolution at its Tuesday night meeting approving increases in the fiscal 2018 pay plan and authorizing the city administrator to implement the updated plan. The resolution was approved as part of the council’s consent agenda, without discussion.

The merit increases and pay plan adjustments will cost an estimated $1.7 million, according to a Tuesday memo to the council from Human Resources Director James Bowers. City staffers worked with Lockton Companies Inc. to review the plan and ensure its market competitiveness.

The 2018 budget included $1.25 million for pay plan adjustments. The roughly $450,000 to cover the approved increases will come from reducing the city’s contribution to the Health Care Fund in 2018 from about $5.44 million to $4.99 million, according to the memo. The fund’s reserve balance is sufficient to cover the $450,000 needed for the increases.

“The City’s pay plan is a key component in recruiting and retaining a quality workforce,” according to the memo.

The city’s staff had worked with Lockton in fiscal 2014 to develop an upgraded pay plan for fiscal 2015, which was approved and implemented in April 2015; the city’s pay plan had been upgraded in 2006. Merit and market increases were approved under the 2015 plan in fiscal 2016 and 2017. The council approved adjustments to the fiscal 2018 plan in December 2017.

According to the memo, city staff conducted the latest review using the same requirements used with the fiscal 2015 plan:

The council also approved changes to guidelines for administering the pay plan. Current employees will be placed in the pay ranges associated with their positions based on credit for 100 percent of their service time in their current positions; 20 percent for all completed years of service with the city in addition to years in their current positions; and 20 percent for all completed years of directly related prior service.

City Administrator Eric Wade will determine when the upgraded pay plan will be implemented. That’s expected to be early in the second quarter, city spokeswoman Denise Rendina said.

In future years, the city’s staff will review pay data annually and recommend required changes to pay ranges and amounts of pay increases.

“These efforts will help ensure the City’s pay plan remains competitive with local peer organizations,” according to the memo. “Any future pay adjustments are contingent upon available budgetary resources and would require Governing Body approval on an annual basis.”

The pay schedule approved by the council Tuesday is below: 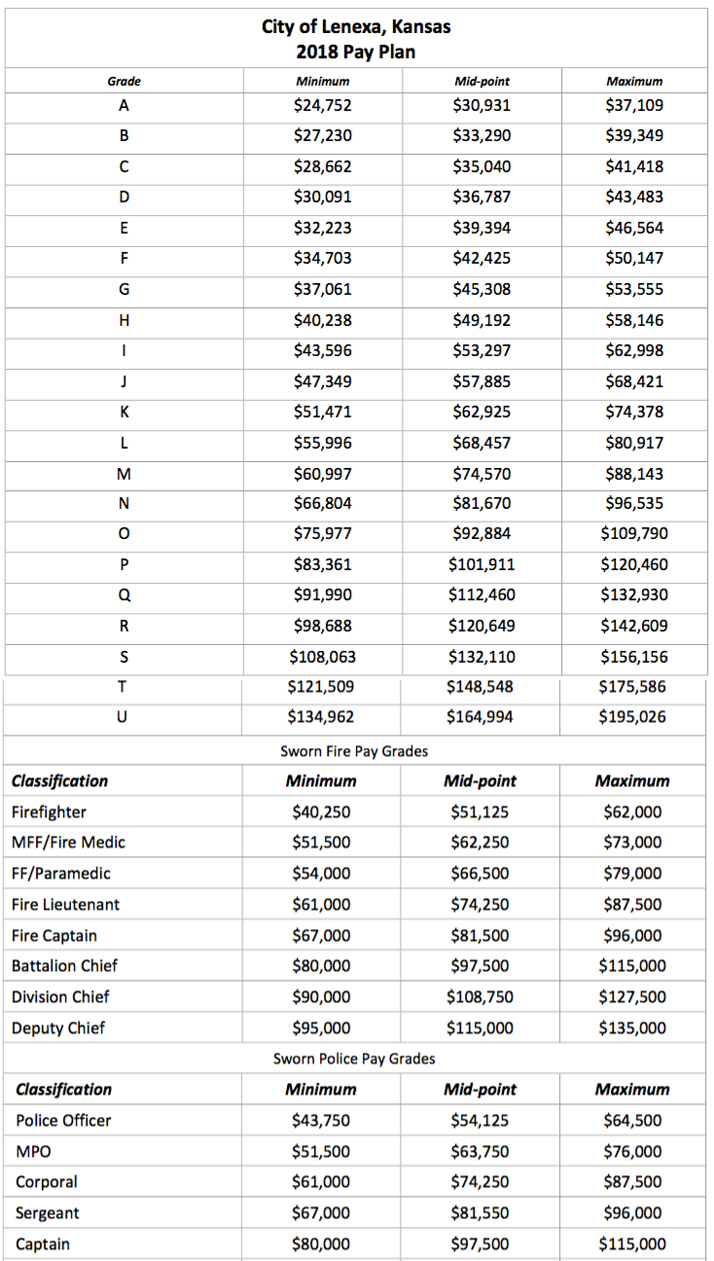