The consultant hired to explore a future for the Overland Park Farmers’ Market told the city council on Monday that it believes moving the venue to Santa Fe Commons a few hundred feet from its current spot would offer a host of benefits to vendors, shoppers and the city.

Following a presentation from Market Ventures’ Ted Spitzer, who led the study of future options for the market, Overland Park’s Doug Johnson told the council that city staff would be recommending against taking any action on a relocation or redevelopment plan for the market at present.

Johnson noted that reaction to the four initial options presented by the consultant had been “all over,” with the Santa Fe Commons option the most polarizing. A large number of participants in focus groups listed it as their top choice for the future of the market. Even more, however, listed it as their least favorite — and there were very few people in the middle.

Instead, Johnson told the council that the city manager would be recommending the allocation of $200,000 to the city’s capital improvement projects budget for 2018 to fund a number of short-term fixes to the current structure — many of which, Johnson noted, were included in the “option one” proposal to upgrade the existing facilities. Those improvements would include electrical work, drainage improvements, pavement repair and fresh paint.

“If that’s approved by the council, that may give the city some breathing room before deciding which, if any, of these options are worth pursuing,” Johnson said.

“Then it should be more obvious how the market would really impact this park and the functions it provides to residents,” Johnson said.

He also noted that it was possible potential locations for the market other than those in considered by the consultant over the past several months may become available.

“It wouldn’t surprise me if other venues appear that want to talk about this process,” Johnson said.

In his overview of the study and Market Ventures’ recommendations, Spitzer noted that the Santa Fe Commons plan offered a number of advantages. For one, it’s a flat surface that would be easily made ready for the new structure. The Santa Fe location would also provide opportunities for multiple uses, including hosting events, that the current spot does not lend itself to. Moreover, among the three “new structure” options explored, the Santa Fe Commons plan would be considerably less expensive at $4.7 million than the plans that would build new facilities on the current site. One of the proposals for rebuilding on the current site would top $17 million.

Here are the points Market Ventures highlighted in the conclusion of the recommendation memo it prepared for the council:

While each redevelopment scenario offers a viable option, the consultant team recommends the Santa Fe Commons option for the following reasons:

Below is a preliminary site plan showing a possible layout of the market in Santa Fe Commons: 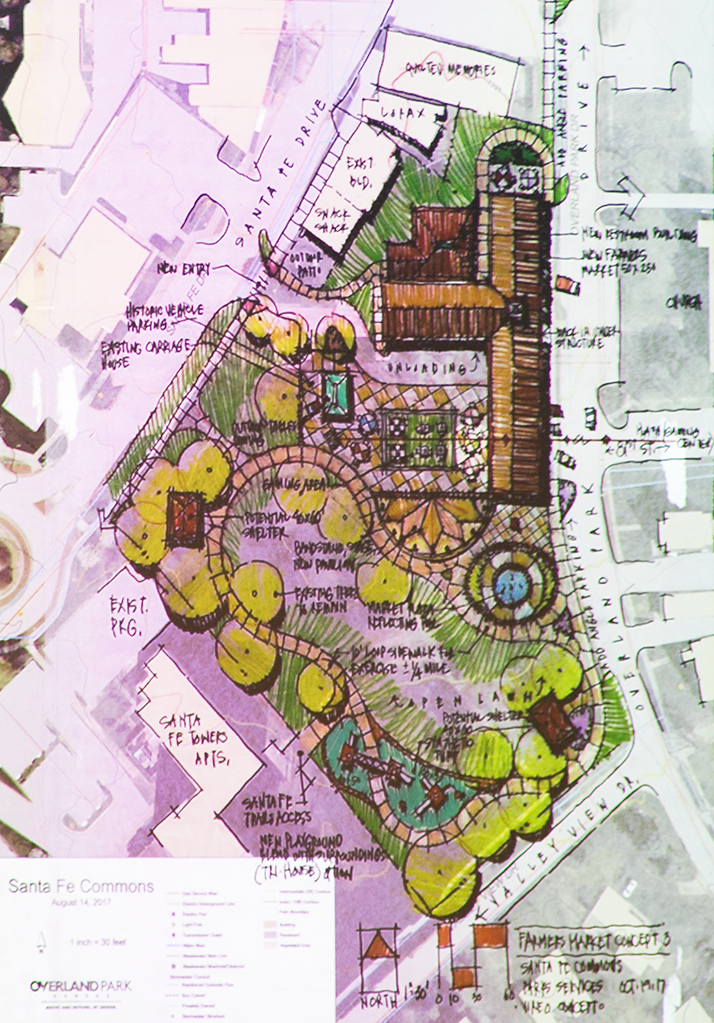 Below is the full memo presented to the council Monday: