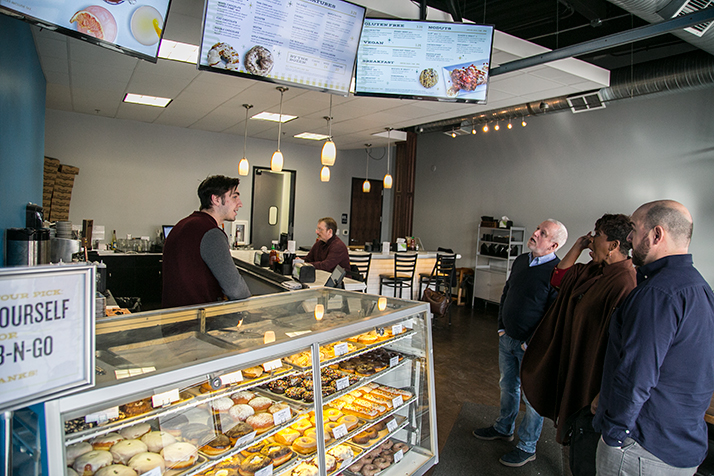 Doughnut Lounge, which opened its original location in Westport 2015, had its first day of operation in the former El Salvadoreño space on Santa Fe Drive last week.

The restaurant serves specialty doughnuts made fresh each day at the company’s north Kansas City kitchen as well as hearty breakfast plates and an array of coffee drinks. Like the Westport location, the downtown OP location will eventually serve cocktails (hence the “lounge” in the name), but the company hasn’t secured its liquor license for the Santa Fe spot yet.

Trevor Banhart, the cafe manager at the Overland Park location, said the company tries to give diners a unique experience, with uncommon flavors and pairings. Among the more popular doughnut options, he said, are the maple bacon, a maple glazed long john with a full strip of think-cut bacon laid on top, and the s’mores, which is topped with toasted marshmallow and crushed graham cracker.

“We’re trying to do things that no one else has done before. We want to create a new kind of experience.”

The restaurant is open Tuesday through Sunday from 7 a.m. to 8 p.m., with the kitchen open until 2 p.m. Doughnut Lounge is closed on Mondays.