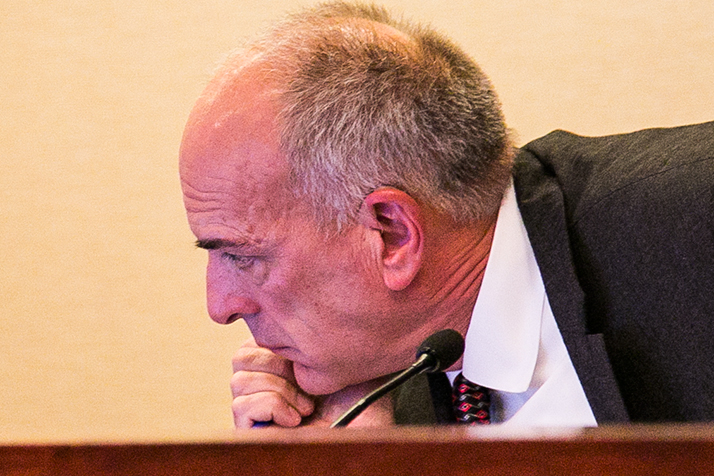 The KCATA employee who Johnson County Commissioner Steve Klika grabbed by the face during a heated encounter this summer asked the metro area transportation authority’s board on Wednesday to have Klika removed from his position there.

KCATA benefits manager Libby Lynch addressed the KCATA board of trustees at its meeting yesterday, saying that Klika’s behavior with her earlier this year was not acceptable and that he should no longer be allowed to serve as Johnson County’s representative on the transportation board.

Lynch stepped forward publicly after reading the story published here on Monday in which Klika acknowledged that he had an interaction with a KCATA employee that led to a complaint against him. During his interview with the Shawnee Mission Post Monday, Klika indicated that the interaction had been harmless and misconstrued.

Lynch told the Kansas City Star’s Mike Hendricks that she decided to come forward with her side of the story to correct the record. According to Lynch, Klika had come into the KCATA a morning in July and delivered a “pompous rant” during which he told Lynch that he was responsible for her continuing to have a job. Then, while discussing a conflict he was having with KCATA chief operating officer Sam Desue, Klika “got up and crossed the room and grabbed ahold of my face, around the chin line,” she told Hendricks. “He was so close to me I could feel his breath on my lips. … He stood kind of holding my face, a bit of shake to it, and really he was telling me how I should handle our COO. I could hardly even speak.”

She reported the incident to the agency’s leadership and attorney. Klika resigned as KCATA board chair in August, and the organization enacted a new policy that prohibits board members from being on site unless they are there for a meeting or with the explicit permission of the CEO.

News of Lynch’s account of the incident prompted significant criticism of Klika on social media Wednesday night. He appears to have deleted his county commission Facebook profile as of this morning.

Klika was absent from Thursday’s Board of County Commission meeting.

Klika’s term on the KCATA board ends next month. He was reelected to a four year term on the Johnson County Board of County Commissioners in 2016. That term expires in 2021.