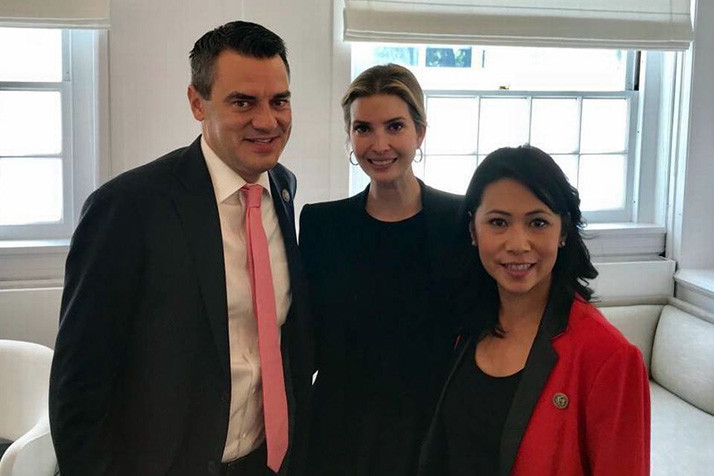 Republican Rep. Kevin Yoder and Democratic Rep. Stephanie Murphy of Florida have co-authored a letter to the chair of the House Ways and Means Committee encouraging the inclusion of the Promoting Affordable Childcare for Everyone (PACE) Act in tax reform legislation that will be released next week.

Murphy, who represents the Orlando area, and Yoder met last week with President Donald Trump’s daughter Ivanka to discuss their ideas for improving the affordability of child care. Their PACE Act would allow families to use tax-free flexible spending accounts on childcare costs as well as making the Child and Dependent Care Tax Credit (CDCTC) fully refundable. As written, the bill would raise the limit on the amount of pre-tax dollars families can allocate to child care from $5,000 per year to $7,500 per year.

The text of Yoder and Murphy’s letter to Ways and Means Committee leaders Kevin Brady and Richard Neal is below:

We write today to bring a crucial issue to your attention as the Ways and Means Committee works on reforming our nation’s tax system. The Child and Dependent Care Tax Credit (CDCTC) is a current tax provision aimed at helping families bear the burden of expensive childcare. As you endeavor to make the tax code work better for all Americans, we request that the final tax reform package include an expansion of the CDCTC. Please consider using our bipartisan bill, H.R. 3632 the PACE Act, as model legislation for potential improvements that could be made to the CDCTC through the tax reform process.

We introduced H.R. 3632, the Promoting Affordable Childcare for Everyone (PACE) Act, in an attempt to combat the exploding costs of childcare. Around the country, countless families are struggling to keep up with the cost of quality care for their children, which has risen by 168% over the last 25 years. Today, childcare for an infant is, on average, more expensive than in-state tuition at a public university. This burden acts as a barrier to employment for some parents. If we want to increase participation in the labor force and give more families the opportunity for economic mobility, then we must address the obstacle that expensive childcare is for working parents.

The tax code has two essential childcare-related provisions, the CDCTC and Dependent Care Assistance Programs (DCAPs), which allow families to utilize tax-free childcare Flexible Spending Accounts (FSAs). However, these benefits have not been updated in years and their effectiveness has been severely eroded by inflation. The PACE Act updates and reforms these two programs to restore their ability to help the American people afford quality childcare. Specifically, our bill would:

The PACE Act has 37 cosponsors, including 23 Republicans and 14 Democrats. The bipartisan support behind this bill reflects the broad consensus that the benefits of tax reform need to be focused on working families. Additionally, the PACE Act delivers a high impact for a relatively low cost, at $37 billion over ten years. We wholeheartedly believe that the principles in the PACE Act, if included in comprehensive tax reform, would help bring significant tax relief to families across America. As you craft legislation to overhaul our tax code, we ask that you take steps to help families afford childcare, and please preserve and expand the CDCTC and DCAPs.

Yoder also spoke at a media event on the child tax credit last week that featured Sens. Marco Rubio, Shelley Moore Capito, Tim Scott, Dean Heller and Mike Lee. You can see his opening comments at the event below:

Yoder came into office in the Tea Party wave of 2010 and has been easily reelected three times. But his support for President Donald Trump ahead of the 2016 election has made him a target for Democrats in a district that voted for Clinton over Trump, with significant money rolling in to a slew of Democratics who’ve announced they’re seeking their party’s nomination for the seat.

At first in-person town hall in a year, Yoder faces backlog of constituent concerns about Trump, healthcare and guns