A budget discussion during Monday’s Roeland Park workshop veered into a debate on whether the city should consider decreasing the property rate by more than 2 mills, the amount outlined in current plans. After prodding from councilmembers Tim Janssen and Ryan Kellerman, the council directed staff to look into how a 7-mill reduction would impact the city’s financial outlook.

Janssen pointed out the city’s decision to increase the mill by 7 in the 2014 budget in anticipation of Walmart leaving had generated $1.4 million in reserves and said now that the city had shored up funds it was time to consider decreasing the mill.

“The mill was raised for a reason, we have met that objective and it’s time to lower it,” Janssen said.

“We’re playing catch up and I think we are doing a good job,” she said.

Mayor Joel Marquardt said he was not supportive of an aggressive decrease in the mill over a one-year period and that the current proposal of a 2-mill decrease was a “sustainable way forward.”

The city has until August 25 to finalize the mill levy for 2018 and submit its budget to the county.

Councilmembers Erin Thompson and Michael Poppa agreed the proposed 2-mill decrease was a good compromise and said they were comfortable supporting that reduction.

Poppa also said he would entertain the option of putting a sales tax initiative on a future ballot and if that passed the council could consider lowering the mill further in 2019.

Kelly and Marquardt cautioned the council that there was a good possibility Walmart would decide to leave the city at some point in the future.

“The Walmart issue is not gone,” Marquardt said. 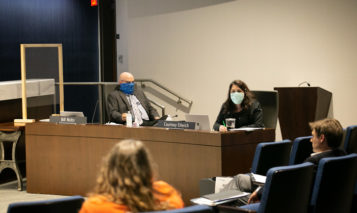 AMC Theaters may not stay in business after pandemic; USD 232 school board talks pandemic’s impact on district goals