Tomorrow is the big unveiling of historian Henry Fortunato’s latest Indian Creek Trail interpretive signs — but before you go see all six of the new signs in person, Fortunato has given us permission to post information from the project here. Earlier this week we took a look at the histories behind Nall and Lamar. Today, we’ll look at a road that served key roles in the foundation of Johnson County as we know it today.

All copy and photos are reproduced with the permission of Sunflower Republic, LLC:

Trans-Mission: Many of the changes that transformed Johnson County began on Mission Road

Due in part to its proximity to Kansas City, Missouri, Mission Road is one of the first places where Kansas hill and prairie transitioned from farms, fields, and horse paddocks to tree-lined suburban terraces, country clubs, and cul-de-sacs.

In the early 20th century, visionary Kansas City real estate developer J.C. Nichols acquired more than 200 acres between Mission and State Line roads for what would become the exclusive residential section called Mission Hills. This and similar developments changed the prevailing perception of Johnson County from a rustic redoubt to an exurban enclave for Kansas City’s elite.

But Nichols’ version of what Johnson County would become was not limited to the wealthy. In 1941, his company began building Prairie Village, named for the Prairie School that in one incarnation or another had been a fixture on Mission Road since the mid-19th century.

By 1950 more than 1,000 homes would be erected on both sides of Mission Road. World War II veterans purchased many of them – attracted by the advertising slogan “Live Better for Less” and taking advantage of low-cost mortgages insured by the federal government. That same year, the National Association of Home Builders awarded a first-place rating to Prairie Village as the “Best Complete Community Development in the United States.”

Over time, other entrepreneurs developed additional acreage along Mission Road. Among them was Victor Regnier, who with his wife Helen, built a residential and commercial property empire beginning on the northern end of Mission Road and moving ever southward. His developments included one of the first Johnson County shopping centers – Ranch Mart, which opened in 1958 at Mission and 95th Street.

Mission Road takes its name from the Shawnee Methodist Mission, which predates the establishment of Johnson County by more than 15 years. Beginning just north of Southwest Boulevard in Wyandotte County, Mission Road courses through the Rosedale district of Kansas City, Ks. , picks up again in Fairway after a slight interruption, and then passes through Mission Hills, Indian Hills, Prairie Village, Overland Park and Leawood. An extension of Mission Road begins at 119th and continues 14.2 miles south into Miami County, ending at 231st Street.

Mission Road is one of the first places where Kansas hill and prairie transitioned from farms, fields, and horse paddocks to tree-lined suburban terraces, country clubs, and cul-de-sacs.

A portion of Mission Road was once known as Porter Road. The name reflected the landholdings of Thomas C. Porter. He arrived here from Kentucky in 1858 and acquired 160 acres on both sides of present-day Mission Road between 69th and 71st streets including some of what is now the Prairie Village Shopping Center and the Indian Hills Country Club. During the early to mid-20th century, Porter’s children began selling off pieces of the properties to developer J.C. Nichols. The last holdout was Porter’s daughter Elizabeth, who had inherited the family homestead. Born in 1871, she had lived most of her life in her house and was loathe to leave at the age of 70. In 1942, she struck a deal – selling the house and 15 acres to the Nichols Company with the understanding that she could stay in the residence as long as she wished. When her health began to fail in 1947, Nichols presented her with a new nearby home (below) on what had once been Porter property, where she lived until her death in 1951. Today the family name is recalled by Porter Park, located at Roe Avenue and Tomahawk Road. It once was the site of the Porter School, also named for the family, several members of which had served on the school board.

Little Schools on the Prairie

An early example of Johnson County’s commitment to public education was the original one-room Prairie School, built in 1866 at the northwest corner of Mission Road and 63rd Street. Known as the “Little Crooked Schoolhouse,” because it was not precisely vertical and leaned several degrees out of plumb, it was superseded in 1882 by a new building located at what is now Mission Road and 67th Street. Replacement school buildings were completed in 1912 and again in 1939. In 1990, the school was destroyed by fire after being struck by lightning. A rebuilt Prairie Elementary School opened in 1993. In 2016, residents celebrated Prairie School’s 150th anniversary.

For some 70 years, a three-story brick mansion set in a landscaped garden at present-day Mission Road and 65th Street was one of the most notable landmarks of eastern Kansas. It boasted walls that were three feet thick and windows six feet high. In its heyday, the home included such late 19th century luxuries as running water in the kitchen, a second story bathroom, and its own central heating plant in the basement. A yellow barn on the grounds housed mechanical marvels of the day that de-horned cattle, ground wheat and corn, and lifted wagon loads of hay – all powered by what was reportedly the largest windmill in Kansas, a wonder which drew sightseers from across the Midwest. The master of this manse was Henry Coppock, a one-time prospector who’d found a rich vein of gold out west when still a young man. In the early 1880s, Coppock acquired more than 900 acres that stretched from State Line Road to Nall Avenue, building the Mission Road mansion where he and his wife Mary raised nine children. Coppock sold his land in 1907. The mansion was razed in 1952 by the J.C. Nichols Company. It became the site of the Homestead Country Club.

Developer J.C. Nichols, best known for creating Kansas City’s Country Club Plaza district, correctly perceived that private automobiles would bring about a new degree of personal freedom. In 1908, he bought a 229-acre Hereford cattle farm in the vicinity of Mission Road. Working with the Hare & Hare landscape architecture firm, Nichols planned curvilinear residential streets on and around the terrain’s rolling hills. Nichols advertised Mission Hills as a place where homeowners could “share in the conveniences and social environment of Kansas City proper” in a “restricted residence section in Kansas.” Restricted, indeed. Until declared unenforceable by a US Supreme Court decision in 1948, residential sales contracts offered by Nichols (as well as other developers in Kansas City and across the country) contained written restrictions preventing resales to African Americans. Sales to Jewish families also were discouraged informally for a time.

As a boy growing up during the Great Depression, Victor Regnier and his family were forced to move 15 times in search of affordable housing. Perhaps that’s one reason Regnier became a homebuilder, providing safe and reasonably-priced havens for young families beginning during the country’s post-World War II building boom.

In the process, Regnier and his wife Helen joined the ranks of the region’s most notable 20th century real estate developers. Starting with Missiondale at 44th Terrace and Mission Road in Wyandotte County, they moved ever southward into Johnson County along or near Mission Road, leaving such residential subdivisions as Reinhardt Estates, Leawood Hills West, Cherry Hills, and Greenbrier in their wake. Often, the entire Regnier family was part of the sales process. When home buyers remarked about the lack of nearby grocery or hardware stores in the growing county, the Regniers transitioned into commercial development with the opening of the Ranch Mart Shopping Center at Mission Road and 95th Street in 1958. In the years that followed, the Regniers developed and acquired additional retail complexes in central and southern Johnson County. By the time of his death in 2000, Victor Regnier was widely recognized as something of a renaissance man – developer, contractor, electrician, entreprenuer, merchant, financier – with a particular interest in science and education. Helen Regnier died in 2004. Today, both are interred at a small cemetery just east of Ranch Mart North Shopping Center. A portion of the eight-figure fortune they amassed went into the Regnier Family Foundation, which has funded programs and facilities at the University of Kansas Edwards Campus, the KU Medical Center, Johnson County Community College, the University of Missouri-Kansas City, Kansas State University, and Syracuse University, as well as the Deanna Rose Farmstead, the Johnson County Museum, Wonderscope, the Shawnee Mission School District R&D Forum, and Union Station.

Several residential developments along Mission Road – such as the Corinth Downs subdivision and the Corinth Paddock apartments in Prairie Village and the Saddlewood subdivision in Leawood – invoke an unexpected hint of bluegrass horse country. The names recall a time when wealthier residents maintained estates large enough to keep horses. One of them – a colt named Lawrin – became the only Kansas-bred horse ever to win a Kentucky Derby. Lawrin was born in 1935 at Woolford Farm, a 320-acre spread near Mission Road and 79th Street owned by Herbert Woolf, a prominent Kansas City businessman who had taken over the Woolf Brothers clothing store established by his father and uncle, and transformed it into one of the most stylish and successful clothiers in the Midwest. Luck seemed to be riding with Lawrin, On the morning of the 1938 Derby, a Louisville, Kentucky, woman taking her dog for a walk found a four-leaf clover and gave it to Woolf, who placed it underneath his horse’s saddle pad. Ridden by jockey Eddie Arcaro, Lawrin – an eight-to-one longshot – won by a length. A 1939 injury while training to face the legendary Seabiscuit ended Lawrin’s career. Lawrin died in 1955. He is buried with his sire Insco just northwest of Mission Road and Somerset Drive, at a cul-de-sac within a gated residential community.

A rare remaining example of early 20th century industrial company housing in a rural setting is located at Mission Road and 163rd Street. Built in 1906 for employees of the Prairie Oil and Gas Company, the self-contained community was called Redel – an anagram of the last name of farmer Jesse T. Elder who had previously owned the property. At its peak, Redel boasted single-family homes, duplexes, a grocery store, gardens, and even tennis and croquet courts, plus approximately 100 workers who operated a pipeline and pumping station located on the Missouri Pacific Railroad line. The railroad delivered oil to the Redel pumping station, where employees then sent it along a pipeline that extended to a refinery at Sugar Creek in northeastern Jackson County, Mo. Advances in oil pumping eventually eliminated the need for the station, and it closed in the 1950s. In 1996 the remnant houses were added to the National Register of Historic Places for their architectural significance.

A statue called “The Homesteaders” is located at the northwest corner of Mission and Tomahawk roads. In 1951, after viewing six plaster models of proposed statues, Prairie Village residents voted for this design submitted by Anna Belle Campbell, then a student at the Kansas City Art Institute. Campbell and Prairie Village officials unveiled the completed sculpture the following year. Today the work stands as a monumental example of the statuary that J.C. Nichols placed at many sites throughout his developments in Kansas City and Johnson County. 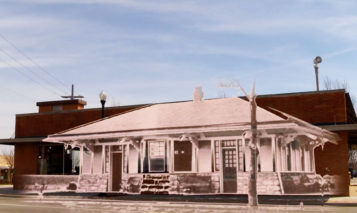 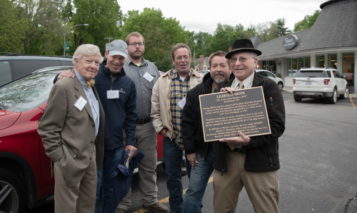 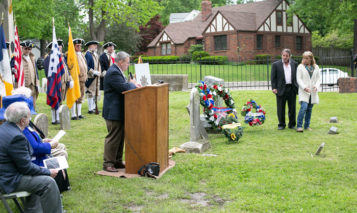