Shawnee Mission Superintendent Jim Hinson’s announcement Wednesday that he will leave this summer after four years leading the district caught teachers and parents off guard — and elicited a range of reactions.

Leaders of parent-teacher groups and the local chapter of the National Education Association publicly thanked Hinson for his leadership, which came at a time Kansas schools faced intense funding pressure from the state legislature and the district worked to address quickly changing demographics.

Linda Sieck, president of the Shawnee Mission chapter of the National Education Association, said that “Dr. Hinson and NEA Shawnee Mission have worked collaboratively to resolve problems. I have appreciated his willingness to hear our concerns as well as our opinions on various matters.”

But behind the scenes, many teachers expressed relief that Hinson’s tenure was coming to an end. One said word of Hinson’s retirement marked a “great day” for the district.

Others reached out to the Shawnee Mission Post to say they felt teacher morale had been seriously damaged under Hinson’s leadership, and that his departure presented an opportunity to return to traditions and policies that had served the community well under previous superintendents Marjorie Kaplan and Gene Johnson.

Regardless of their reaction to the news, it’s safe to say that almost no district employees saw the announcement coming. Several told the Shawnee Mission Post that building principals received notice Wednesday morning that they needed to attend a previously unplanned meeting, leaving them scrambling to get to the administrative offices shortly after arriving at their buildings.

Board of Education President Sara Goodburn said Hinson had informed the board last week of his intent to announce his retirement. At no point did the board request his resignation or retirement, she said.

Hinson will continue to lead day-to-day operations of the district through his official departure at the end of June, but the board plans to take up the issue of succession quickly. “The board will officially consider this issue at our Monday, April 24th board meeting and begin the process of developing a leadership transition plan,” Goodburn wrote.

This far into the spring, it would be all-but-impossible for the board to conduct a search to identify and hire a full-time replacement prior to the start of the 2017-2018 school year. The board intends to identify an interim superintendent to take over for Hinson, Goodburn said, though the board would not be taking that action at its meeting next week.

With three of the board of education’s seven seats on the ballot this year, several parties have suggested the district needs to wait until after the November elections before voting on a new full-time superintendent.

“This certainly highlights how important the upcoming school board election will be for our community. This is an excellent opportunity for the board to show that it’s plugged into the community by hiring an interim superintendent until after the public weighs in during the November school board election,” said Jennifer Howerton, one of the leaders of the group Education First Shawnee Mission. “The community needs to have a conversation about the future of the district, and having a healthy field of school board candidates will open up that conversation.”

Brian Koon, a frequent critic of district leadership during Hinson’s tenure who recently filed to run for the at-large seat on the board of education, said Hinson’s departure meant patrons could “look forward to a future filled with the kinds of changes we wish to see.”

“Shawnee Mission must once again become a district where every student feels safe and has the opportunity to succeed,” he said. “Choosing a new superintendent is the first step in that process, and today we lay the foundation for that future.” 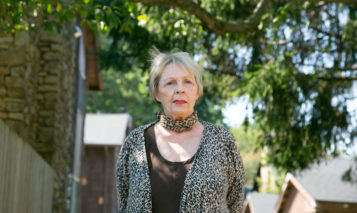