Shawnee Mission School District Superintendent Jim Hinson this morning made the unexpected announcement that the 2016-17 school year will be his last.

“After 34 years in public education, with 28 of those serving as an administrator, I’ve decided to retire effective June 30, 2017,” Hinson said in a statement. “This decision will allow me to spend more time with my family, and pursue other lifelong goals.”

Coming to Shawnee Mission following the retirement of Gene Johnson, Hinson set about making a number of significant moves shortly after his arrival in 2013. He initiated a $20 million “one-to-one” technology program that provided each student with their own MacBook or iPad. He invested millions in the modernization of security infrastructure, bringing on former Overland Park Police Chief John Douglass to oversee an expanded security force and surveillance technology. And he spearheaded efforts to secure and invest millions for the construction of new schools and other facilities.

Such changes were welcomed in segments of the district, where some patrons saw evidence that Hinson was breathing new energy into schools. But his controversial public stance in favor of the block grant bill in 2015 put him at odds with many local legislators, and led to bruised relations with parents and teachers who supported the injection of more money into public schools. Word that the board of education had approved a nearly 10 percent raise for him at the same time he had spoken publicly about the financial strains the district was facing didn’t help.

He also began to lose the support of many longtime district employees, with teachers and building administrators complaining that they felt like they were having policies forced on them and that those who aired opposing views were being punished.

In recent months, Hinson’s stance on a number of issues — from the district’s policy banning teachers from wearing safety pins in the classroom to his ideas for rewriting the Kansas school funding formula — had drawn pushback from both patrons and education advocates.

Hinson and Board of Education President Sara Goodburn issued statements on the decision that were distributed to district staff. Those statements are copied below:

A Note from Jim Hinson

After 34 years in public education, with 28 of those serving as an administrator, I’ve decided to retire effective June 30, 2017. This decision will allow me to spend more time with my family, and pursue other lifelong goals.

I’m extremely thankful I’ve had the opportunity to work with each one of you. You are a tremendous team, and I admire the dedication and talent I see every day. Thank you for all you do for the district and our students.

In addition, the board, administrators and employees of this fine district have provided me with terrific support over my tenure. I’m proud of the district and what it is today; and feel confident that the dedicated board members and talented leadership team will continue to ensure that Shawnee Mission remains one of the very best school districts.

A Note from Sara Goodburn, President of the Board of Education

On behalf of the board, we thank Dr. Hinson for introducing our district to relevant, innovative, state-of-the-art methods to deliver high quality education to all our students. He has been instrumental in developing our district’s 10-year strategic plan which enhanced academics, technology, safety and security, and communications. The district benefitted greatly from his impressive leadership and expertise in developing the 2015 no-mill-increase bond issue, allowing us to build new facilities. We wish him well as he begins this new chapter of his life.

The board will officially consider this issue at the board meeting at 7 p.m., Monday, April 24 at the McEachen Center. It will begin to develop a leadership transition plan, which will include appointing an interim superintendent. 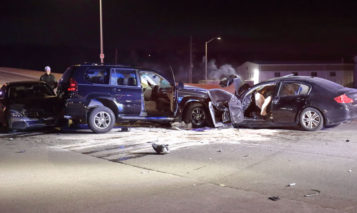