This year’s Holiday Lights and Festive Sights celebration in Mission marked the debut of a freshly planted Colorado spruce as its centerpiece and loads of activities at the Sylvester Powell Jr. Community Center.

It also was 15-month-old Camden Sweeney’s first s’more. The toddler and his family were among the many toasting the treat at fire pits outside the community center Friday evening.

Green and red net lights twinkled on the side of the community center and a crescent moon hung in the clear evening sky.

“He was way too young last year,” said Camden’s mom, Shannon. “We’re Mission residents and we look forward to this event. It’s always something fun to do with the family.”

Nearby, Lisa Frye and her 10-year-old daughter Mikayla were melting marshmallows too. It was Mikayla’s second stab at making s’mores and the messy result was delicious.

“I’ve lived here forever and it’s the first time we’ve come,” Lisa said. Mikayla added, “all my friends are singing in the choir.”

The Shawnee Mission North choir was singing on the lawn nearby, and everybody snapped to attention when Santa and Mrs. Claus arrived on a flashing fire truck.

Then, following a brief welcoming speech from Mission Mayor Steve Schowengerdt, people turned to the free hotdogs furnished by Casey’s Auto Repair and the cozy confines of the community center gym.

Kathy Lockard, administrative supervisor, said this is the second year the festival has been held at the Powell Community Center. It previously had been on Johnson Drive. She estimated the even draws 500 people to celebrate the start of the holiday season.

The Powell Center also was hosting a Free Family Fun Night along with the holiday event and the gym was filled with kids playing. And in a conference across the hall, Santa and Mrs. Claus were taking orders from a line of eager children.

This year’s Holiday Lights also was the first year for an 18-foot Colorado spruce to be the centerpiece. The tree was planted two weeks before. 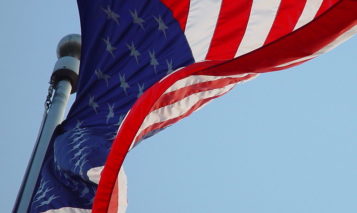 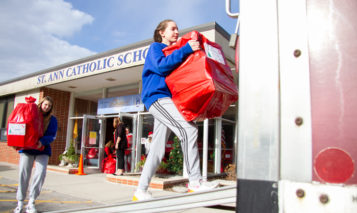