Changes are coming to the cell tower site at 63rd Street and Mission Road in the coming months.

On a split vote Monday, the Prairie Village City Council approved a request from Consolidated Fire District No. 2 to allow contractors to replace the existing 150-foot cell phone tower on the property with a fatter version that engineers say will allow the site to accommodate four carriers using the most advanced technology.

At present, the tower holds equipment for just two carriers — Verizon and AT&T. The new tower will allow both of those carriers to update their equipment and accommodate Sprint and T-Mobile as well.

Some members of the council expressed disappointment that the plan presented by Selective Site Consultants, the consulting engineer on the project, did not include options that made the tower blend in to the surrounding area better. Jori Nelson and Eric Mikkelson told SSC’s Justin Anderson that they had hoped to see the company flesh out options for disguising the tower as a tree or a flag pole. Anderson said that the drawbacks of those options — loud noises from the flagpole and the unnatural look of the fake tree design — made neither attractive applications for the 63rd and Mission site.

Anderson said his company’s goal was to provide an option that would accommodate cell phone carriers’ technological needs for years to come and prevent the city from having to consider more and more cell tower applications in the coming years.

“The tower as it is now can go no further with the technology,” Anderson said.

The measure passed on a 7 to 5 vote, with councilors Ruth Hopkins, Steve Noll, Andrew Wang, Sheila Myers, Brooke Morehead, Ted Odell and Terrence Gallagher voting in favor of the application. 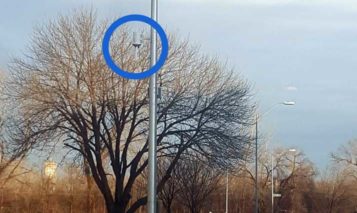