A resident of a Mission apartment escaped shoeless and only with the clothes he was wearing from an early morning fire.

The fire broke out overnight at a north Mission apartment complex and left several families without homes this morning.

Fire crews responded to the two-alarm fire shortly after 12:30 a.m. Thursday morning. The resident of the apartment where the fire started said he was awakened by heavy smoke in his apartment. The smoke detectors had not gone off when he woke up and ran out of the apartment. He said the smoke appeared to be coming from an area around the fireplace. However, the gas fireplace had not been used in a long time, he said.

The resident, who declined to give his name, called 911 and then pounded on the doors of the other apartments in the building to get those families out. He said everyone was safely out of the building, which housed four two-story apartments. The apartment complex is located at 51st and Russell, just to the west of Lamar on Mission’s north side. One cat was still unaccounted for as firefighters from Consolidated Fire District No. 2 and Overland Park worked to put the fire out. Multiple units from each fire company were on the scene.

Fire was showing from the second floor of the northern-most apartment as firefighters entered through the upstairs window and heavy winds were fanning the flames and pushing heavy smoke throughout the complex.

The resident, who watched shoeless on the hillside across a parking lot in the 47-degree weather, said his wallet was in the shorts he grabbed to put on and he mistakenly shoved a TV remote in his pocket thinking it was a cell phone. He did get his phone out, but left his car keys in the apartment.

CFD2 Deputy Chief Jeff Scott said the fire was out at 3:28 a.m. but a unit is still on the scene this morning. The fire marshal also is staring his investigation this morning to determine the cause. 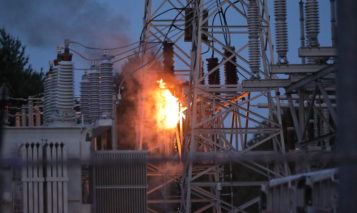 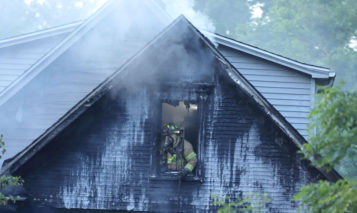