Battalion Chief Bruce Randall said firefighters received two calls about cars trapped in rising waters, one at the entrance to Kansas City Country Club and another near 5400 Mission Drive.

A Leawood family also reported that their car stalled out in rising water on State Park Road in Fairway after they’d dropped off some friends. They put the car in neutral and tried to push it out of the dip in the road where the water was deepest, but with the current gaining force, they recognized they were in danger. A passing police officer ordered them out of the water. They put the car in park and abandoned it. Sunday morning the car still wouldn’t start.

Gusts of wind associated with the intense storm front also felled trees in the area. Reader Christie Green sent in this picture of a damaged tree blocking the road at 69th Street and Roe Avenue: 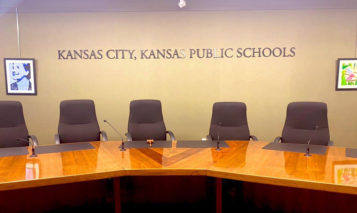