The developers of the Mission Gateway project have submitted a revised plan that calls for a significant increase in the amount of retail space planned for the development.

A Mission city council committee was told Wednesday that the revised plan merges two of the buildings (B and C) along the Shawnee Mission Parkway side of the development into one larger building that encompasses the footprint of both original sites. The new plan would add about 100,000 square feet of retail and entertainment. One of the original buildings is the site for the Toby Keith’s I Love This Bar and Grill.

The larger building will be three stories with an underground parking garage below it. Mission Community Development Director Martin Rivarola said the new plans had just come in a few days ago and are under review. He said the second and third stories will be retail and entertainment tenants in keeping with the development plan.

The city’s independent financial advisor, Bruce Kimmel, said the developers are making progress toward getting “bigger, higher value tenants” in place for the additional space. The original size of the retail space for the Gateway was 300,000 square feet. The anchor tenant is Walmart, which is moving from Roeland Park into a new 150,000 square foot store in the Gateway near the corner of Roe Avenue and Johnson Drive. 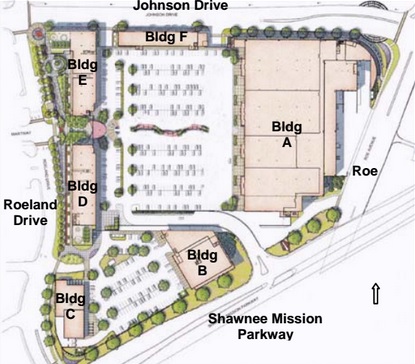 The mixed-use project also includes 300 apartments in buildings along Roeland Drive and Johnson Drive. The project broke ground this summer, but foundation work outlined for this fall in the development agreement has not started. The latest construction updates on the city’s Web site indicate a delay in getting permits and approvals to start underground utility work.

Kimmel told the council that Tom Valenti, the New York developer for the property, is frustrated that it is taking longer than anticipated. However, Kimmel said, “we are not seeing anything that would cause us to raise red flags.”

An anticipated bond sale in February will be delayed if financing is not wrapped up by early January, Kimmel said, and the city will need to know the tenants then as well. Councilors were told that the space was more than 60 percent leased.

Once financing and tenants are known, then an independent review of the projected revenue stream must be completed before the city sells bonds to support the project. The reaction of the council appeared to be largely negative when Kimmel and the city’s bond counsel said Valenti might ask for a bigger city contribution to support the increased costs of the additional square footage.

The city is planning to issue more than $37 million in bonds for the project. Of that, $30 million would go to development costs, $6 million would immediately pay back city costs for storm water improvements and the remainder would cover construction oversight for the city. Increased sales and property tax from the project will pay off the bonds and an additional storm water reimbursement to the city.

The council originally approved the public funding package for the Gateway in January 2013 and the first grading began in July.