How long should a church bell ring, if at all? That is just one noise dispute that Mission Woods is grappling with after complaints from residents of the small community.

The church bell problem stems from the rebirth of the Saint Rose Philippine Catholic Church on Rainbow Boulevard which opened in January. It is the only church in Mission Woods. When the church came back to life as a Latin Mass congregation, the ringing of the church bell came with it. That has not made all Mission Woods residents joyful. 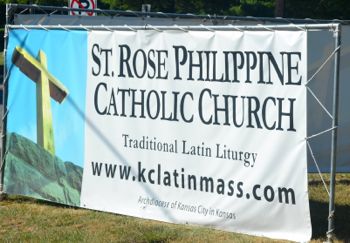 And, Mission Woods Mayor Robert Tietze says, the city’s noise ordinance currently prohibits “ringing of bells or gongs” inside the city. At a city council meeting this week, several residents expressed their displeasure with the length of the ringing, the frequency and the loudness.

The church only rings the bell on Sundays, five feast days, and on Christmas and Easter at midnight, church representative John Watkins told the council. The Sunday ringing is only for High Mass, around noon, he added.

Watkins pointed out that the bell has been there since 1947. The church was formerly Westwood Lutheran and was purchased in 2011 and renovated. During an animated exchange at the council meeting, one resident suggested that even though the building was there, the current congregation needs to fit in to the community. Another asked if bells couldn’t rung inside the building. “This is how they express their faith,” Watkins said. He also pointed out that most churches have bell towers.

“I feel certain we will amend (the ordinance) to allow the ringing,” Tietze said. The first proposed change would have allowed ringing the bell for five minutes on the requested days. Tietze said the city attorney will recommend whether it should be reduced to three minutes.

The other issue, which has been a concern for several months, involves Pembroke School’s renovation of playing fields on the Mission Woods side of the state line. Residents whole live along the edge of the field wanted restrictions on the hours of play.

Dr. Steve Bellis, the Pembroke headmaster, said the school would commit to not using the field closest to the houses after 7 p.m., but could use the lower field until 8 p.m. He suggested that most times of the year, it is not light enough to use the fields later.

“I’m 50 feet from the soccer goal,” said David Sederholm. “I would like to go into my backyard. (It is) a lot of loss of privacy.” Other nearby residents had similar complaints and noted the long opposition to the fields.

The school also plans to place a fence that would keep people off the property between the playing fields and the home. A revised ordinance is expected to be introduced next month dealing with the playing fields.

More than a dozen Mission Woods residents waited out a 45-minute executive session called at the start of the meeting to weigh in on the two issues.