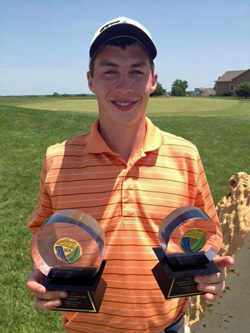 SM East’s Chase Hanna may have had an off day at the KSHSAA 6A golf tournament last month. But he was back on track in a big way Thursday at the Kansas Golf Association’s Boys Junior Amateur tournament.

Hanna took first place in the 138-golfer field with a three-round score of 210 — six-under par and good enough for an eight-stroke lead over second place finisher Zach Kirby of Dodge City.

SM East was well represented at the tournament, which took place Tuesday through Thursday at Quail Ridge Golf Club in Winfield. SM East sophomore Andy Spencer tied for fourth place overall in the tournament with a score of 222. Hanna’s fellow graduated senior Connor Knabe finished tied for eighth overall at 225.

Hanna will play at the University of Kansas next season. Knabe will be playing at Kansas State University.