Six Johnson County firefighters played a part in the response effort to aid victims of the category F5 tornado that cut a 17 mile trail of destruction through Moore, Okla., earlier this month. 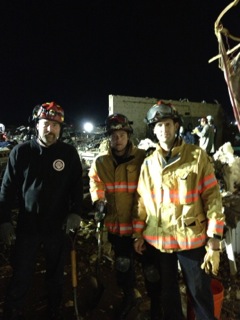 The six member team of Midwest Search and Rescue and Consolidated Fire District No. 2 firefighters deployed to Moore around 10 p.m. the night of the storm. Consolidated Fire District No. 2’s James Hansen, Mike Morse and Jon Grossman met up with  Randy Hill, Curtis Newman and Larry Hemphill from the Midwest Search and Rescue to make the trip south.

The rescue team was coordinated by Battalion Chief Jeff Scott and Randy Hill, a retired Leawood Fire Chief and founder of Midwest Search and Rescue.
As the pair did in 2005 after Hurricane Katrian, the two of sought out volunteers with search and rescue training to go help out in Moore.

Scott said the six men traveled almost 400 miles through the night and got to work helping the victims almost as soon as they arrived.

“They were going to an elementary school to help move debris because they had heard there was still a missing child there, and on the way someone told them to come look at a house because they heard some whimpering,” Scott said. “So they moved some debris and they found a dog there and rescued him, then moved on to the elementary school.”

The men met up with Oklahoma Taskforce 1 at Briarwood Elementary at around 3 p.m. and assisted with removing debris until 7 p.m. After that they traveled to the Plaza Towers Elementary School for a 12 hour search and rescue mission in which they performed a secondary search of several classrooms over the course of the evening, digging through debris by hand and clearing the way for heavy machinery.

The men worked from around 3 p.m. to 7 a.m. the next day. After the 12 hour search was complete, the team was sent back home to Johnson County.