What do these two photos have in common? Stumped? 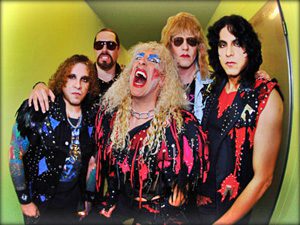 The answer, of course, is that they are both  Twisted Sisters. One is the coffee shop and cafe on Johnson Drive in Mission. The other is the 1970s era heavy metal band – still performing, by the way. Right now they share the name, but that’s going to change.

Sandi Russell, who along with her sister, Nancy Hansen, are the sisters operating the Mission shop, says she has received a letter telling them to change the name because it has been trademarked by the band. The letter comes from attorneys representing John French (or Jay Jay French or John French Segall) who is a guitarist and founder of Twisted Sister – the band, not the coffee shop. “At first I thought it was a joke,” Russell said.

The origin of the two names – Twisted Sister and Twisted Sisters – are vastly different as you might guess. Russell says the name for her store is a reference to a family label given to the sisters by their late brother back in the 1960s. He also used to call Nancy the “blond tornado” so Twisted Sisters and the logo, which looks like a tornado sketch are rooted in family and our Kansas location. Twisted Sister the band, we assume, has a different origin.

While Russell figures she doesn’t have a choice but to look for a new name, she thinks hers has a deeper history than the 1973 band origin. The lawyers have asked her to make the change in a timely manner and told her she can still use “Twisted,” but not in the combination that she uses now.

No decision yet on what Twisted Sisters will become. At least the letter arrived before Russell’s permanent sign was completed.