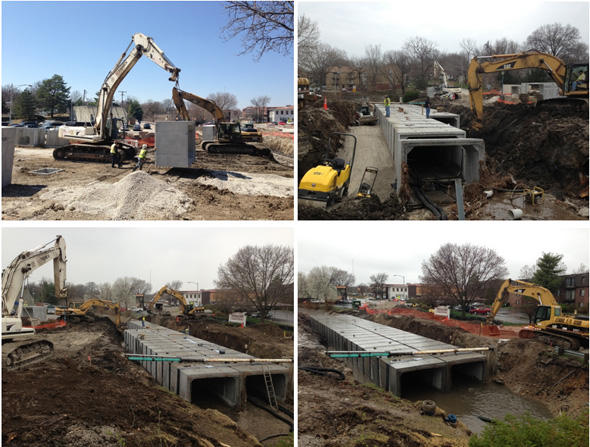 Construction projects, both public and private, in Mission are on a pace that shows a sharp rebound from the recession.

The city gave an update on several public projects that are under way, including the changes to transit stops, the Martway and Johnson Drive rehabilitations and the swimming pool replacement. But Martin Rivarola, Community Development Director, said private development in the city has rebounded dramatically in 2012 and 2013 both in the number of permits issued and the value of the projects that are being built.

The Gateway project has filed for permits for grading and for foundations for the Walmart building and its parking garage. Construction should start soon, Rivarola said. But the city also has three development proposals for the former Neff Printing property at 7080 Martway. Two new petitions for Community Improvement Districts have been filed for properties between Johnson Drive and Martway and west of Lamar. Those would assist redevelopment if approved.

In the public arena, the new transit shelters and the transit center on Johnson Drive are getting ready to open. A ribbon-cutting for the transit center will be held May 31 and operations will move from the county building at Martway and Lamar to the new center the following Monday.

The Martway and Johnson Drive rehabilitation projects are starting with the intersection of Martway and Woodson scheduled to re-open in three weeks, but to be followed by road replacement west to Lamar up to July 1.

Work on Johnson Drive will begin this year, but the full rehabilitation, which calls for taking the street down to dirt all the way across the street from Lamar to Nall, will start in 2014, according to Public Works Director Justin Pregont. The Johnson Drive replacement will include expanded sidewalks, new streetscape, utility relocation and new lighting. Angle parking and four-lane traffic will be maintained.

More about the Mission public and private projects can be found at the city’s construction page.