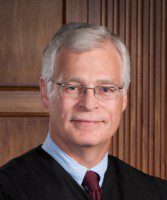 In his opinion, Hauber disputed the standing of plaintiffs Al Terwelp and Earl McIntosh, both of whom are affiliated with the state’s Libertarian Party. Hauber had dismissed the party itself as a plaintiff during a hearing on the case last week.

Hauber argued that Terwelp and McIntosh had failed to show the city’s bans on openly carried firearms caused them any injury:

…even if Mr. Terwelp and Mr. Mcintosh have visited Prairie Village to incite a challenge to the ordinance, and intentionally open-carried firearms within that jurisdiction, it is insufficient to establish standing because a plaintiff may not acquire standing by unnecessarily submitting himself to injury.

Moreover, Hauber effectively scuttled Terwelp and McIntosh’s hopes of amending their claims to address Hauber’s concerns with their arguments:

While ordinarily a deficiency in a petition might enable the plaintiff leave to amend to properly assert its claims, the Plaintiff in this instance cannot create what does not exist and, in the Court’s estimation, the effort would be futile because it cannot conceive of any set of facts that would create an injury in the circumstances presented. The petition is replete with allegations that are repetitive, conclusory and short on substantive injury of any kind.

McIntosh, the state Libertarian party’s 2nd Amendment chair, said Thursday he and his colleagues had not read all the way through the ruling, but that they would be issuing a statement on the matter soon and would begin making plans to appeal.

“We aren’t going away,” he said. “We will continue to challenge this. You can’t deny a civil right. The federal and state constitutions guarantee a right to bear arms.”

The city of Prairie Village released a statement on the matter Thursday afternoon:

“The Mayor and City Council respect the civil rights of citizens and those citizens have been very vocal in expressing their first amendment opinion to opposing ‘open carry’ in Prairie Village,” it reads. “Cities in Kansas are vested with strong home rule authority to determine their local affairs.”

We’ll have more on this issue tomorrow morning.