The Mission Hills home Hollister and Porter Hovey’s family moved into in 1989 needed some work.

There was the shag carpeting, for starters, which covered seemingly every floor. And then the gold wallpaper, bright orange formica counters, and a mirror that took up an entire wall in the master bedroom.

“It was thoroughly stuck in the 70s and 80s,” Hollister recalls. “Just not a good looking space.”

But over the course of the next several years, the girls watched their mother Lana bring her impeccable taste and eye for classics to bear. The musty modern ranch was transformed into something close to timeless.

“It did become incredibly beautiful when they were done with it — very cottagey and bright,” said Hollister. 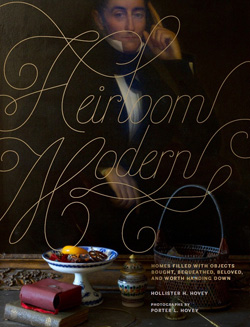 Lana died in 2002, but her aesthetic sense and love of design details live on in her daughters, SM East graduates whose talent for decorating is about to be put on international display with the release of their first book, “Heirloom Modern,” from publisher Rizzoli.

Always interested in design, the Hoveys began to attract significant attention for their quirky but classic style when they moved into a Williamsburg, Brooklyn, apartment together and documented the painstaking process of decorating it with a collection of family heirlooms and antiques culled from curiosity shops throughout Brooklyn. They got a major boost on the project when their father, also named Porter, decided to move from the house on 63rd Street into a smaller one across the state line.

“He said, ‘Come and get anything you want,'” Hollister said. “We ended up making two trips in a U-Haul from Kansas City back to New York. We felt like Thelma and Louise by the end of it.”

The result was a lavishly appointed space that earned the Hoveys top billing in a 2009 New York Times feature on a group of vintage-obsessed designers it dubbed the “New Antiquarians.” That attention helped the Hoveys land a series of major interior design clients — and attracted an agent who successfully sold the idea of their book, which went on sale on Amazon earlier this week.

Porter, who graduated from SM East in 2001, took the photos while Hollister, who graduated in 1996, wrote the copy. In addition to featuring the Hoveys’ apartment and those of family and friends, the book documents the Hoveys’ formative years, as the girls’ parents made their way from being newlyweds in New York to young parents in Nebraska and Kansas City. With family at the center of both the girls’ love of design and the stories told in the book, the Hoveys say “Heirloom Modern” is a testament to their mother.

“Personally, I think she would be very proud,” says Porter. “I like to think it’s a very nice memorial to her and what she stood for. And I think she would find it so funny that all these things she loved had made it back to New York.”

The Hoveys are planning a promotional event for the book to be held in Kansas City this June. We’ll post details when they are announced.

After a year of darkness onstage, Johnson County’s Theatre in the Park returns with ‘Mamma Mia’