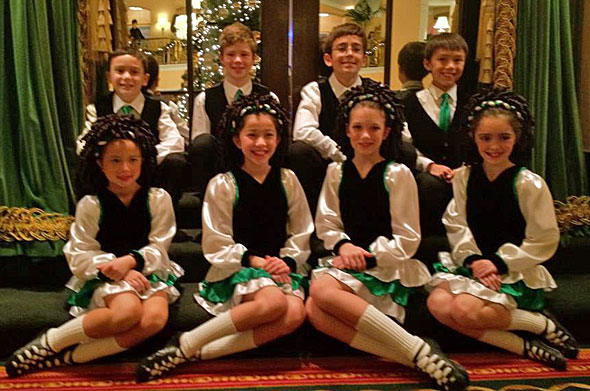 St. Patrick’s Day may be behind us, but the Irish spirit is as strong as ever in a group of young northeast Johnson Countians who are making their debut at the World Irish Dancing Championships today in Boston, Mass.

The team of eight 8-12 year olds train together at the O’Riada-McCarty-Manning Academy of Irish Dance in Westwood. Among the four boys and four girls are four young northeast Johnson County residents: Michael Adamson of Leawood; Josephine Cotton of Mission Hills; Mary Katherine Gallagher of Prairie Village; and Leah Mailand of Leawood.

The group earned the right to travel to Boston by taking fifth at the 2012 Mid-America Oireachtas
in Grand Rapids, Mich., in November.

“I was ecstatic!” said teacher Emily McCarty of the team’s regionals performance. “To have a team comprised of such young dancers come together as a team to give such a top rate performance under the pressure of the regional championships is amazing. Then to see that the judges recognized this effort by awarding them 5th was just icing on the cake!”

The team is scheduled to perform for the first time in the competition sometime before 10:30 a.m. central time.