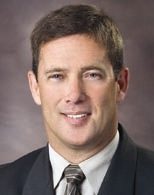 The Shawnee Mission School Board on Tuesday announced that Dr. Jim Hinson, currently the superintendent of the Independence School District, will replace retiring superintendent Dr. Gene Johnson at the end of the school year.

Hinson has led Independence since 2002, and was a key figure in the district’s move to annex several schools from the Kansas City School District between 2006-2008. He authored a book about the experience, “Inspiring Greatness: A Community’s Commitment to a Brighter Future.”