Despite a dismal first half and a total of 20 turnovers on the night, SM East’s boys basketball team pulled out a 53-41 win over Wichita East in the first round of 6A state tournament play, earning the right to take on 13-9 Blue Valley West in the semifinals Friday.

The Lancers trailed by six at halftime, but a three-pointer from senior Vance Wentz to open the third quarter spurred SM East’s offense at the same time Wichita East’s shooting went cold. Sophomore Lucas Jones drained a field goal with 2:40 left in the third quarter that put the Lancers up 30-29. SM East never trailed again, and Jones punctuated the recovery by turning a breakaway pass with 3:40 left in the fourth into yet another dunk — a move that prompted the crowd of SM East students and parents watching the broadcast on Metro Sports at Johnny’s to erupt in cheers: 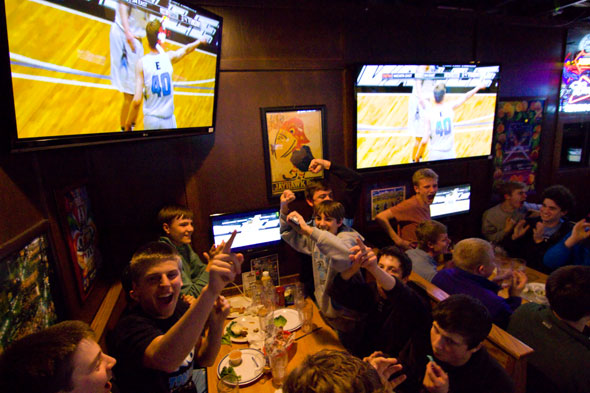 Head coach Shawn Hair told 610 Sports after the game that he was disappointed in the team’s ball handling, but happy to walk away with the victory.

“You can’t turn the ball over like that. We were very lucky to win,” he said. “We’ve got to play better.”

Zach Schneider led the Lancers in scoring with 18 points. Wentz had 12, Chase Hanna had 11, and Jones had 10.

The Lancers and the Jaguars will meet at 8:15 p.m. Friday at the Charles Koch Arena on the campus of Wichita State University.