Northeast Johnson County residents who had visions of a cozy snow day spent with their families were in for a rude awakening Tuesday as the second major winter storm in a week blasted the area, felling tree limbs and causing widespread power outages.

The Prairie Village and Fairway areas were among the hardest hit in the entire metro area, with nearly 2,000 customers in both the 66205 and 66208 zip codes without power at some point, according to KCP&L’s outage reports. The complexity of the repairs made the work slow going for power crews, and left many homes in the area without power overnight. As of this morning at 6 a.m., there were still nearly 1,000 customers in 66208 without power, and more than 500 in 66205.

The more than 10 inches of snow that piled on top of what remaining from last Thursday’s storm weighed down tree limbs and hampered road clearing efforts throughout the day Tuesday.

The trouble spread quickly after 9 a.m. as wet, heavy snowflakes built up on branches, prompting a chain reaction of falling limbs and strained electrical infrastructure. Power lines in the neighborhood north of SM East started to spark after a tree branch fell on them:

(Video shot by Ali Blake). Twenty minutes later, a transformer close to those lines exploded and burst into flames.

Though temperatures near the freezing point made road clearing efforts somewhat easier than they had been with last week’s storm, road crews faced an immediate challenge of simply finding a place to move the snow: The remnants of last week’s storm were already filling up the sides of streets. An overnight dusting of an additional two inches Tuesday night only complicated matters.

The persistent snowfall made for slippery going all over — even plow trucks. One reader sent in this photo of a loader going to rescue a Prairie Village plow truck stuck in the road at Linden and Briar: 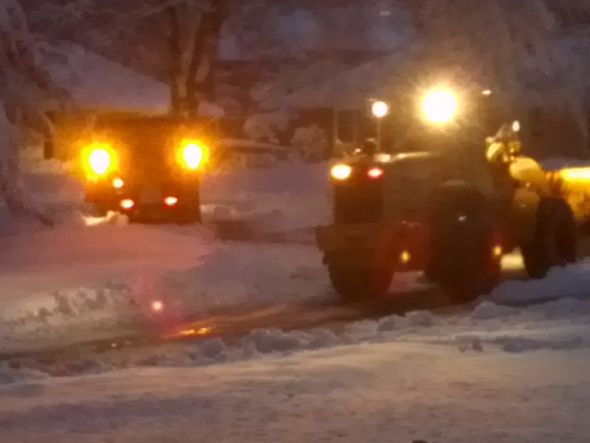 We’ll have more information about efforts to clear the roads and restore power to area homes as the day progresses.